GRNews
GreekReporter.comGreeceGreek Woman Helpless in Gaza: "I Pray to God to Protect my...

Greek Woman Helpless in Gaza: "I Pray to God to Protect my Children" 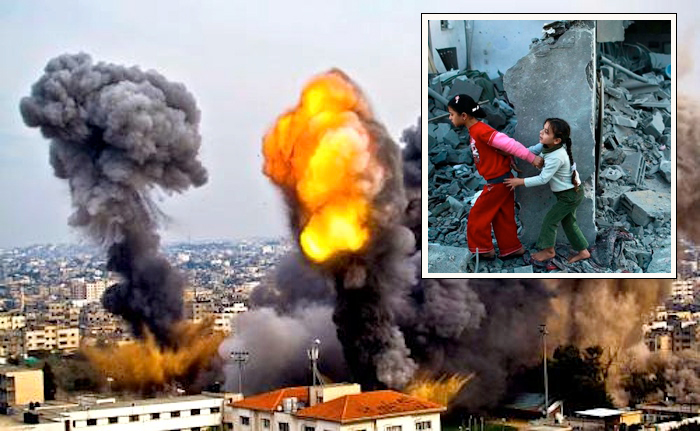 Angeliki is a Greek woman living in Gaza with her five children and her Palestinian husband, whom she met when he was studying in Greece. They fell in love and she moved with him in his country of origin. Since then, Angeliki has witnessed several wars, conflicts and bombings that cost the lives of thousands of people.
During the 2008 war that lasted 23 days and the 2012 war she had asked the Greek Consulate to help her leave Gaza. Unfortunately, she was informed that she could only take her children with her, not her husband. “We either go together, or not at all,” she answered. “I would never leave my husband in Gaza, alone. I will follow him to the end.”
Today, Angeliki is living through the same tragedy: bombings, killings, dead children. She describes the situation in Gaza: “We live downtown. The bombings won’t stop. There are many blackouts and food is going quickly. I don’t care about the hunger though, I just want this situation to come to an end. Every time we hear bombs, we embrace our five children and pray to God that the next bomb doesn’t fall on our house.”
This time, the Greek Consulate called Angeliki and told her that she could leave Gaza and her husband could go with her. However, due to health problems of their youngest child, they could not leave. “The baby is very sick and needs oxygen constantly,” she said.
“If we leave now, we will have to travel across Gaza. In order for the baby to travel safely, we need to constantly have an oxygen tank with us, and we very well know that the soldiers are not going to allow that. So we are trapped here.”
In the area the family lives in, everything has been destroyed. The hospitals have either been bombed or they are so full that patients have to sleep on the floor. “Yesterday evening bombs fell near our area. We lost friends, neighbors. Bombs are falling all around us.”
When Angeliki followed her husband to Gaza, she had dreamt of a very different life. “Palestine was a place where I could easily adapt because it resembled Greece. The two countries have similar climate, food and similar mentality. The Gaza Strip is very beautiful because it is located near the sea,” she said.
“I raised my five children here. How can I leave it all behind?” she asks herself.
“I want my kids to live, not suddenly close their eyes in a cloud of dust created by a bomb that was dropped between us. I don’t want anything to come between us, that is why every night I hold them tightly in my arms…” said Angeliki.
“When this situation clears, my mother wants to go study in Greece. I want that too. I want to become a doctor and then come back here to help people. I took the exams and I had one of the best scores, but now I don’t know if I will ever get my high-school diploma in order to go to Greece. I know my mother prays that I do,” said her oldest son, proving that hopes and dreams never die.