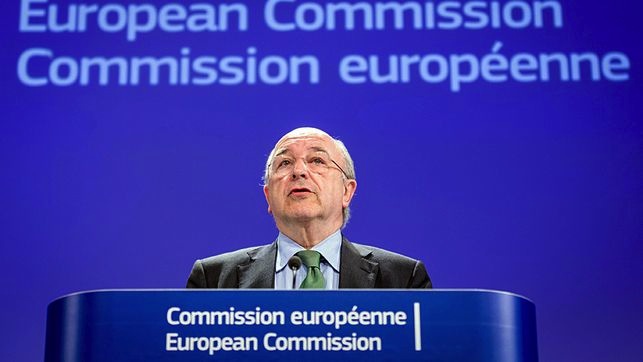 The European Commission announced on Wednesday that it has found the restructuring plans of the National Bank of Greece (NBG) and Piraeus Bank – including the integration of several Greek banks – to be in line with EU state aid rules. Since 2008, Greece and the Hellenic Financial Stability Fund (HFSF) have granted repeated capital and liquidity support to NBG and Piraeus Bank.
The Commission assessed that the measures already implemented and those envisaged in the future by both banks will enable them to fully restore their long-term viability, while limiting the distortions of competition brought about by the state aid granted.
Commission Vice President in charge of competition policy Joaquín Almunia said “Through the restructuring plan, NBG will focus its activities on the strong Greek and Turkish banking operations and improve their efficiency. This will ensure that the bank can continue financing the Greek economy on a sustainable basis.”
For Piraeus Bank, Almunia commented that “the successful integration of several Greek banking activities has strengthened Piraeus’ liquidity position. The enlarged group now needs to complete the significant rationalization process started two years ago in order to restore its long-term viability, allowing it to finance the Greek economy in a sustainable way.”
NBG has already started to implement rationalization measures, such as a voluntary staff retirement scheme, salary cuts, branch closures and further cost cutting initiatives in Greece and southeastern Europe. Its plan provides for a further restructuring of international operations and non-core domestic activities, and a reinforcement of Greek banking operations, mainly through a rationalization of operating expenses, a reinforcement of the net interest income and prudent risk management. NBG will decrease its shareholding in its Turkish subsidiary Finansbank, which will strengthen the capital position of NBG but will still retain a majority shareholding.
Piraeus Bank has acquired several Greek banking activities since July 2012, which had been resolved (Agricultural Bank of Greece) or put to sale by foreign banks (Millennium Bank, Geniki Bank and the branches of Cypriot banks in Greece). It has integrated these banks within a short time, started to rationalize their operations and has already achieved synergies. Its restructuring plan, inter alia, provides for a significant downsizing of Piraeus’ international operations, which are loss-making.
(source: ana-mpa)