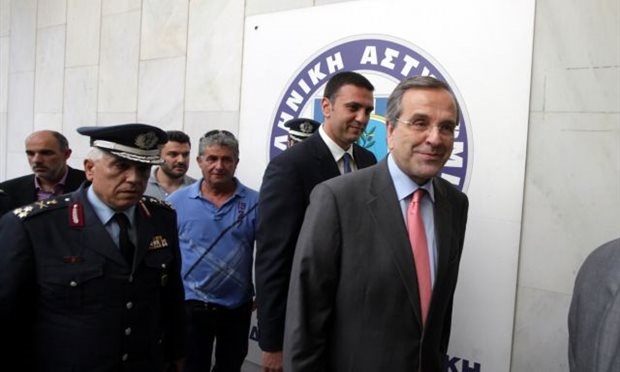 Prime Minister Antonis Samaras visited the Police headquarters at 2:30pm on Tuesday, where he met with the Minister of Public Order Vassilis Kikilias and the Greek Police Chief Dimitris Tsaknakis.

Samaras expressed his satisfaction for the arrest of terrorist Nikos Maziotis and congratulated the Greek Police over their recent success.

“On behalf of the overwhelming majority of Greek citizens, I would like to extend my heartfelt congratulations and thanks to the Greek Police for its contribution. The police officer serves as the shield of the average citizen, society, and ultimately, our democracy. This is something Greek police officers prove every day and for this I sincerely thank them,” said the Greek Prime Minister.

Maziotis, along his life partner Paula Roupa, had escaped prison in June 2012 following their release in 2011 after serving the maximum of 18 months in pre-trial detention. They were convicted in absentia last year and sentenced to 25 years for participation in Revolutionary Struggle, the terrorist group responsible for the attacks against the U.S. embassy and the Athens Stock Exchange.

According to the authorities, Maziotis had been involved in two bank robberies since his disappearance. Roupa is still at large.