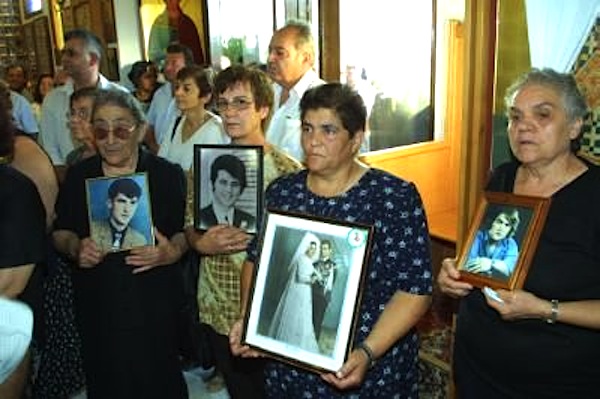 President of Cyprus Nicos Anastasiades vowed on Monday evening to stand by the relatives of missing persons.
He was addressing an event at the Presidential Palace in honour of missing persons.
President Anastasiades told missing persons` relatives that they should feel proud of their legacy.
A legacy, he added which on the one hand honours their families and on the other places a historic responsibility on the shoulders of the political leadership to ensure that their sacrifice will be vindicated.
The state will stand by your side, he pleged, adding that it is the least it can do.
He expressed his full solidarity towards the families of missing persons.
I assure you that the Cypriot government will continue to do its utmost for a comprehensive and effective investigation into the fate of your loved ones”, he stressed.
President Anastasiades noted that the ultimate goal is to put an end to this humanitarian problem which continues to cause pain to both Greek Cypriots and Turkish Cypriots seeking to find out about the fate of their loved ones.
He stressed that “in this effort we expect cooperation, good will and sincerity from the other side, without its effort being concentrated in finding a way to serve political or other expediencies or avoid responsibilities.”
In his address President of the Pancyprian Organisation of the Relatives of Undeclared Prisoners and Missing Persons Nicos Sergides said that the state finally honors the missing persons for what they did in the name of the freedom and territorial integrity of the Republic of Cyprus.
He recalled that the decision to honour all those who fell and who are missing was by the Cabinet on August 25, 2010 and that the first such ceremony took place on October 16, 2010 when the first 143 missing persons whose remains had been identified were honored.
He said that today`s ceremony and two other ceremonies this week will complete the process of honouring all missing persons who served in the army during the Turkish invasion, as part of their service or as volunteers, and their families.
Cyprus was divided in 1974 when Turkey invaded and occupied its northern third. UN – led talks have been underway since February this year, aiming to reunite the island under a federal roof.
As a result of the 1974 Turkish invasion of the island, 1,619 Greek Cypriots were listed as missing, most of whom soldiers or reservists, who were captured in the battlefield. Many of those missing were last seen alive in the hands of the Turkish military.
A further 41 more cases of Greek Cypriot missing persons have been added. These cases concern the period between 1963-1964, when inter-communal fighting broke out but none of them has been identified yet.
The number of Turkish Cypriot missing since 1974 and 1963/64 stood at 503. A total of 1073 remains have been exhumed by the CMP, 491 of which have been identified with the DNA method (366 Greek Cypriots and 125 Turkish Cypriots).
President Anastasiades and Eroglu have agreed to jointly visit the anthropological laboratory of the Committee on Missing Persons on 24 July.
(source: CNA)