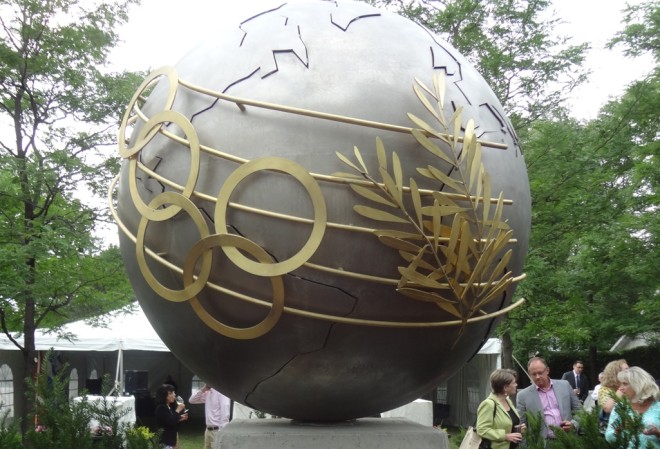 An impressive sculpture, symbolizing the Olympic Games around the globe, was installed in Gaia park at the municipality of Town of Mount Royal, a region located on the border of Parc Extension.

It is a sculpture by Praxitelis Tzanoulinos, crafted in Greece, and represents a sphere carrying the Olympic rings and olive branches. It is made of steel, has a diameter of 1.4 meters and weighs 320 pounds.

Mayor Philippe Roy unveiled the sculpture, noting that the work of art was offered to the municipality by the Greek Community of Montreal, as a tribute to the city from where the Olympic Torch passed twice in the past. The mayor also said that Gaia park was chosen due to its Greek name and the fact that it symbolizes the Earth, as does the work of the Greek sculptor.

The Consul General of Greece in Montreal, Thanos Kafopoulos, spoke during the unveiling ceremony, noting that he feels proud that the work of a Greek artist was placed in one of Montreal’s finest locations, thanking the municipality for accepting the sculpture and the four Greek families that sponsored its construction: Paul and Melpa Kamateros, Nikolaos Tsatas, Nikolaos Arkolakis and Jimmy Christopoulos.

Melpa Kamateros, former municipal councilor, pointed out that with this sculpture, the Greeks of Montreal are leaving their mark in the town where the Olympic flame has passed, representing the continuity of their story.