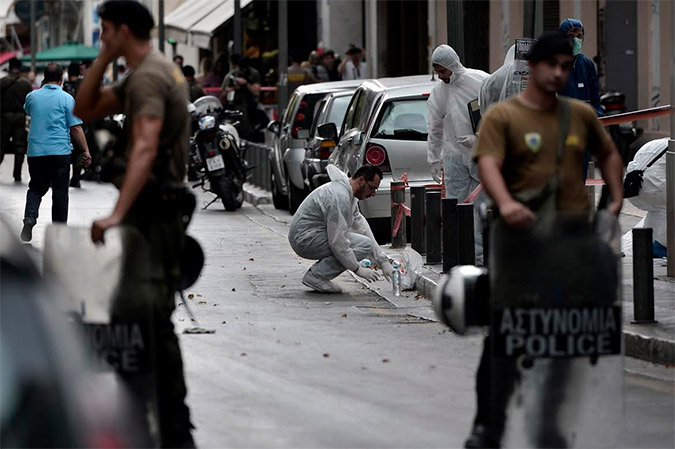 Greek Police are seeking a hideout or other clues regarding the activities of left-wing militant group Revolutionary Struggle after its leader, Nikos Maziotis, was arrested following a dramatic shootout in downtown Athens yesterday.
Maziotis, who had been at large since the summer of 2012 after violating his conditional release with his wife Panayiota Roupa, was seriously injured in an exchange of fire with police in the busy Athens district of Monastiraki, which also left a policeman and two tourists – a German and an Australian – with minor injuries. Police sources indicated that they are close to arresting Roupa, as well as “November 17” hit man Christodoulos Xeros, who disappeared during a prison furlough in January.
An text message sent by a disguised police officer led to the arrest of the 42 year-old Maziotis, who is considered one of Greece’s most wanted terrorists. The officer saw a man that she thought looked like Maziotis at the Omonia ISAP train station and immediately signalled the anti-terrorist squad. The man took the train from Omonia towards Piraeus but left the train at the next station, Monastiraki, after apparently realizing he was being watched.
Maziotis underwent successful orthopedic (osteosynthesis) surgery on Wednesday at Evangelismos Hospital in Athens, in an operation that lasted more than two-and-a-half hours. He was injured by a bullet during the shootout, which destroyed his brachial bone.
According to his surgeons, Maziotis will likely need a follow-up operation next week, and possibly a third (neurosurgical) operation in the future. They estimate that he will need to remain hospitalized for at least 15 days but will be heavily guarded on the eighth floor, in a specially adapted hospital room for inmates.
Counter-terrorism officers are focusing on an area running from the district of Patissia in Athens to Grammatiko and Keratea in northeastern Attica, as well as southern Attica, in the search for the Revolutionary Struggle hideout.
A key element in the police search are the keys found in Maziotis’ backpack following the shootout in downtown Athens. Police, according to information, are searching the districts of Patissia and Kipseli, where he allegedly lived with this wife. Maziotis usually travelled by train or metro and was always in disguise.
According to announcements made by the Greek Police Chief Dimitris Tsaknakis, in a joint press briefing with Citizen’s Protection Minister Vassilis Kikilias on Wednesday evening, Maziotis was carrying a fake ID under the name Michail Michelakis. The counter-terrorism squad is focusing its attention on the identification card in order to locate his hideout and, possibly, a small arms depot.
The card showed a date of birth of April 16, 1977, as well as the photograph of another person whom the police are seeking for questioning.
A silver Hyundai Accent was bought using this identification in 2013, in Athens, with a license plate “YHT 2959”. The car appears similar to the vehicle that Maziotis and his accomplices used during the bloody armed robbery of Klitoria, Kalavryta, in the mountainous region of north-western Peloponnese.
Tsaknakis appealed to the public to provide information related to the false identity assumed by Maziotis – which could have possibly been used for renting houses or other things – or regarding the aforementioned car, by calling the counter-terrorism squad at the numbers 1014 and 10414.
Since his disappearance in July 2012, Maziotis has been linked to six armed robberies, an armed attack on New Democracy’s offices in Athens and a car bomb blast outside the Bank of Greece in the city center.