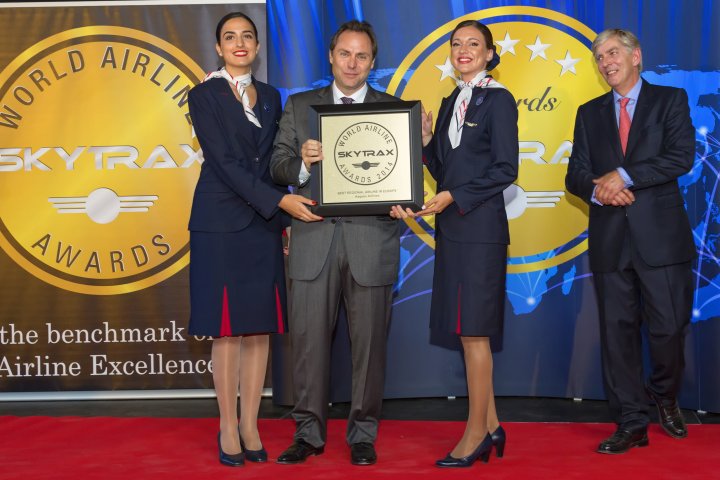 Greece’s Aegean Airlines won the Best Regional Airline in Europe Award for the fourth year in a row.

The 2014 Skytrax World Airline Awards are based on 18.85 million completed surveys by customers from over 160 countries, who chose Aegean Airlines among roughly 245 airline companies worldwide for its high quality services.

Accepting the award, Aegean Airlines Vice Chairman Eftichios Vassilakis underlined that “it is of great importance for a Greek airline to be honoured with the award for Best Regional Airline in Europe for the fourth consecutive year and to receive the acknowledgment of passengers worldwide. We are well aware of the fact that there is always room for improvement in order to maintain our passengers’ devotion and trust in the future. This continuous distinction of Aegean Airlines is yet more proof of the fact that Greece has companies able to pass muster in a highly competitive environment, offering high quality services and attracting tourism of similar level”.

On his part, Skytrax CEO Edward Plaisted noted that “this award recognizes the front-line service quality being delivered by Aegean Airlines staff across all customer-facing areas, both in airport and on board environment.”

Aegean Airlines announced it has expanded its capacity for this year by 1.15 million seats, to a total of 13 million seats, while maintaining eight hubs in Greece with the addition of its new one at Chania, Crete.

During the announcement of its summer schedule, the company confirmed the operation of 205 international and 51 domestic routes, with 6.6 million available seats for 33 Greek destinations and another 6.4 million for 81 overseas destinations.

Aegean Airlines is also strengthening its fleet with five Airbus A320 and A321 aircraft, reaching a total of 50.