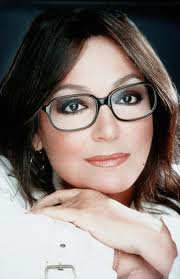 World-famous Greek singer Nana Mouskouri returned to Greece as part of her tour to celebrate her 80th birthday.
On Monday, July 14, Mouskouri gave a concert at the foot of the Acropolis in Athens, where six years ago she said goodbye to the music industry. “I want to be clear: six years ago, at the Odeon of Herodes Atticus, it was goodbye,” she said.
As the singer has stated, during that period she was feeling that she was aging and her health was damaged. “I was always with the doctor, my body was hurting, my back ached.”
Last year, Mouskouri decided  to return to the music scene with a tour to celebrate her 80th birthday, in October. The tour that features her best-known songs, jazz and popular songs, started at the end of 2013, in South America, and will continue until early next year.
Mouskouri, known for her signature black-rimmed glasses, became famous during the 1950s for interpreting the literary works of major Greek poets. After decades in the music business, she served as a member of the European parliament between 1994 and 1999. When the Greek economic crisis broke out, she offered Greece her MP pension out of “duty to the country” proving her deep love for her homeland.