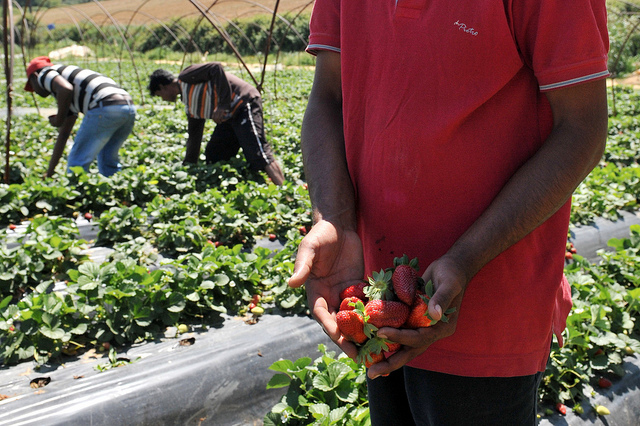 After many delays in payment, inhumane living conditions and racist treatment by the Greek Police, 800 immigrant farm workers of mainly Pakistani origin proceeded with a strike last week in the town of Skala, Peloponnese, in southern Greece. The strike began on July 3 and lasted almost a week.
According to local media, the strikers marched from the town hall to the city’s police station where they met with police authorities. They are expected to press charges for ill-treatment by the Greek Police.
Pakistani workers in Skala had also gone on strike in September 2010 after they returned from work and found that their employers had thrown their belongings into the streets, kicking them out of their houses.
This is the latest in a series of scandals of a similar nature.
Last year, about 30 workers were wounded in a shooting incident at a strawberry farm in Nea Manolada after demanding the payment of wages they were owed. The owner of the farm, Nikos Vaggelatos, and the three gunmen are currently on trial for the incident.
On July 1, during a joint press conference held by the Pakistani Community of Greece, the Immigrant Workers League and the United Movement Against Racism and the Fascist Threat (KEERFA), several immigrants reported incidents of non-payment of wages and violence.
Ejaz Ahmed, a translator working with Doctors Without Borders (MSF), said that they are not allowed to sit in the town square and at cafes, go swimming at the beach or rent houses. He added that they are forced to live in dozens inside chicken coups, warehouses and derelict buildings, while at the same time they are asked to pay 50 euros rent for these miserable living conditions.
Meanwhile, the neo-nazi party Golden Dawn is trying to present the immigrants’ strikes as an Islamist takeover.