Greek Culture Ministry Will Work with Interpol to Trace Artifacts 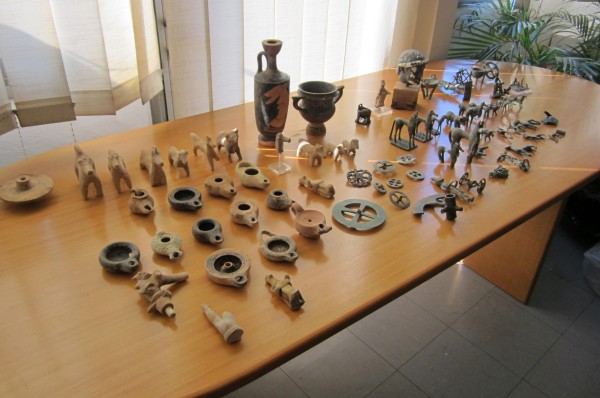 Greek Ministry of Culture plans to cooperate with Interpol in a bid to trace some 100 Greek artifacts that have been missing since World War II and the subsequent Greek Civil War, Kathimerini newspaper reported.
The initiative comes in the wake of the return to Greek authorities earlier this month of more than 10,000 artifacts dating from the Neolithic era that were illegally removed from the region of Thessaly in central Greece by Nazi archaeologists during World War II.
The artifacts, which include pot shards, stone tools and obsidian blades, were returned to Greek authorities from the German Pfahlbaumuseum on Lake Constance in Unteruhldingen, southern Germany. Cultural officials hope many more such treasures can be repatriated.
“A lot of artifacts that were taken away during the occupation are still missing,” Suzanna Houlia, the head of the ministry’s department for the documentation and protection of cultural heritage. “We might not have an exact total number but many of them have been adequately documented and now they must be located,” she said.
Greek officials have already started scouring the websites of major international museums that display exhibits of unknown origin from the period of WWII. Among the items being sought are two clay figurines that two Italian officers have allegedly removed from a house on the island of Sifnos, Greece.