First Assyrtiko to Be Planted in the US 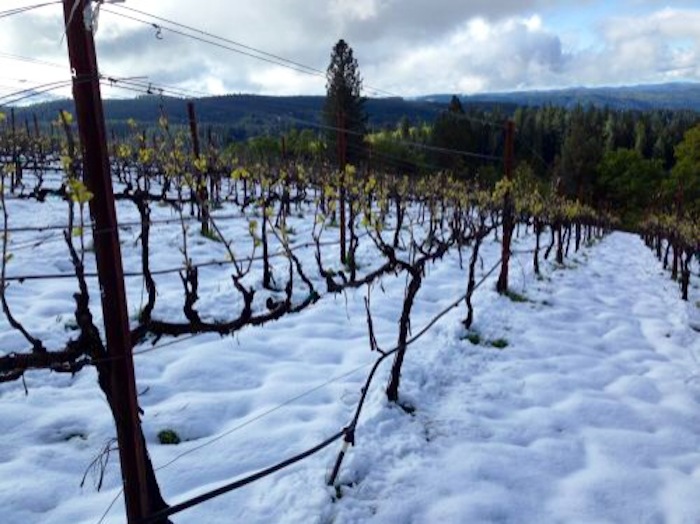 Assyrtiko vines have handled strong winds, shallow soils, hot summers and cool nights since ancient times in their homeland of Santorini. A high elevation vineyard at 3200 feet (975 meters) with severe risk of frost, in the mountains of the Tahoe National Forest in the US, will add yet unknown challenges for this variety.

The risky endeavor to plant Assyrtiko in this seemingly improbable location is the brainchild of Larry and Dayle Rodenborn, the husband and wife team of Tryphon Vineyards. They just picked up sixty-four baby Assyrtiko vines from Foundation Plant Services (FPS) at the University of California, Davis. These vines represent the first of their kind legally available in the States, and in all likelihood are the first to be planted by a bonded winery in the country. Details about the clone can be found here.

Their original plan was to plant Xinomavro; I remember discussing this with them back in 2010. They had really hoped to get their hands on some clippings but this task proved impossible. Assyrtiko was an excellent second choice and will mark their first foray into white wines.

Who are the Rodenborns and what drove them to attempt to grow Assyrtiko at such risky vineyard site?

Tell us a little about yourself and your winery.

Larry is half Greek, his mother is from Corfu, and from the day we decided to go into the wine business, we knew that we wanted to incorporate our Greek heritage into our winemaking. It was the inspiration for the winery name, it is something we take into great consideration in our decisions to maintain a more “old-world” style of winemaking and it is most certainly our motivation when it comes to planting new vines. The winery was a crazy impulse buy, as neither of us had any prior wine making experience. Larry is a physicist and Dayle is a social worker, but we both love wine…and adventure….and a challenge… so we bought a mountain vineyard 7 years ago and have never looked back.

Why did you choose to plant Assyrtiko vines?

We have a love affair with Assyrtiko going back to our honeymoon in Santorini. It is a grape that grows well in shallow, rocky soils with little organic matter much like our own soil. It is also one of the most interesting white grapes in the world and we wanted to be the ones to bring it to the United States.

What are your thoughts on how this variety might cope with the conditions prevailing at your high elevation vineyards?

The conditions in our vineyard are not too different from Santorini, with the altitude being the major difference. We have strong winds, shallow soils, hot summers and cool nights. In practice, the elevation primarily effects the tannins in the skins and the yields, both of which we can deal with. We think Assyrtiko will love it in the mountains. The elevation presents a challenge for any white grape due to the risk of frost. But it is a risk you have to take if you want to grow high elevation whites.

Sixty-four baby vines does not sound like much – do you plan to simply experiment for now, and perhaps increase plantings later?

Sixty-four vines are all we could get from Foundation Plant Services. Assyrtiko was only released this year and they had limited stock. We are hoping that a nursery got hold of the rest of the available stock so that there will be a good supply going forward. We are going to experiment with the Assyrtiko but we hope to either get more next year or try growing some from clippings. The plan is to get to at least 1/2 an acre and we are planting them own-rooted. The vines we got this year will not go into the ground until next year.

If all goes well, when will you sip your first glass of Assyrtiko from vines grown in your soil?

It will probably be three years from the time we plant until we have something. Do not expect to see Tryphon Assyrtiko until around 2018.

Just two years ago, it was announced that Assyrtiko was planted for the first time in Australia. Last week, well known wine writer and journalist Jane Faulkner announced on Twitter that she tasted the resulting wine in a world’s first. I sincerely hope to find a similar tweet regarding the first US Assyrtiko in a few years time.