Tension on First 'Open Store Sunday' in Athens and Thessaloniki 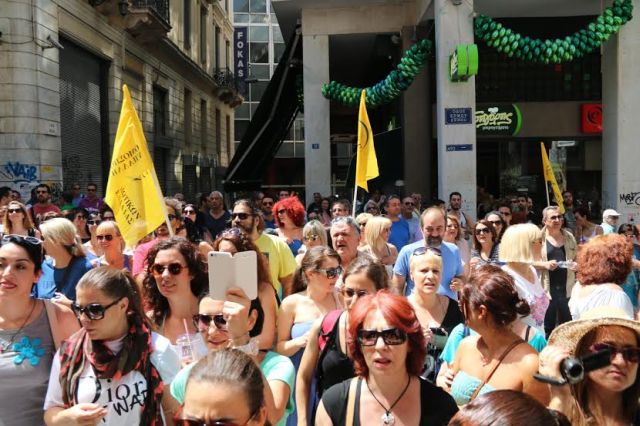 Stores will be open in several tourist areas across Greece on Sundays, following a controversial government decision allowing stores to remain open all 52 Sundays, especially in large cities and tourist areas, as part of a pilot program.
The city centers of Greece’s two largest cities, Athens and Thessaloniki, are among the seven regions where retail stores are allowed to open on Sundays, along with shops on the islands of Rhodes, Mykonos, Santorini, Kos, Syros, the peninsula of Halkidiki in northern Greece, and the Pikermi and Rafina districts in Attica.
The decision has sparked strong reactions, with the Federation of Private Employees (OIYE) calling a 24-hour strike on Sunday as well as a demonstration in downtown Athens’ main shopping Ermou street. The Hellenic Confederation of Professionals, Craftsmen & Merchants (GSEVEE) and the Athens Traders Association had also called on shop owners not to open their businesses.
Most stores followed the call for a strike, while those few shops that decided to open, faced angry unionists who blocked their entrances yelling “Out! Out!”
After tension eased out, a few more shops decided to open, however few people went shopping.
In the northern port city of Thessaloniki, commercial traffic was even worse. Only one out of every ten stores opened up today.
Most shops decided to join the strike called by the local Commercial Union and GSEVEE, and therefore only a few stores—mainly large chain stores—opened today. Some tension was reported at the main commercial streets of the city as well.
The measure, which is due to be published in the government gazette, is among the prior actions demanded of Greece under the memorandum agreements for the bailout loans, which stipulate that the ministerial decision must be issued by July 7, 2014 and state the regions where shops have the option to stay open every day of the week, regardless of size and without the approval of the regional authority.
Its implementation will be among the actions to be monitored by the next Troika review and, judging by the results of the pilot implementation of the measure in the above regions, the issue of Sunday opening for all shops in the spring of 2015 will be re-examined, without ruling out full deregulation of shop opening hours throughout the country.