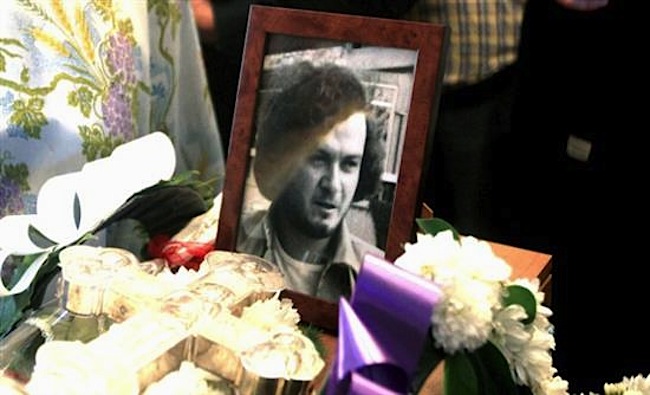 The funeral of Yiannakis Liasis took place yesterday in the Turkish occupied church of Ayia Triada Gialousas, in the Karpas peninsula of northern Cyprus. This was the first time a Greek-Cypriot missing person was allowed to be buried in the northern part of the island, which Turkey occupies since the 1974 invasion.
So far, a total of 404 remains of Greek-Cypriot missing persons have been found and identified. Out of those, 331 remains belong to persons who were listed as missing during the 1974 Turkish invasion (a list of 1619), 64 remains belong to people who were killed or passed away, while 9 remains belong to missing persons killed during inter-communal strife of 1963–1964.
Cypriot President Nicos Anastasiades and Turkish-Cypriot leader Dervis Eroglu agreed, during a meeting held on July 7, to jointly visit the anthropological laboratory of the Committee on Missing Persons (CMP) on July 24, prior to their meeting on the same day.
The CMP has also found and identified a total of 125 remains of Turkish-Cypriots out of 502 missing persons reported. Out of those, 229 concern the period 1963–1964 period and 273 the year of 1974. Director of the Office of the President of the Republic Panayiotis Antoniou said that 36 other cases were reported to the CMP at a later date, 2 of which concern 1974.
The numbers reveal that there has been good progress in recent years as regards to locating and identifying missing persons, Antoniou said, adding however that there is still a lot to be done.