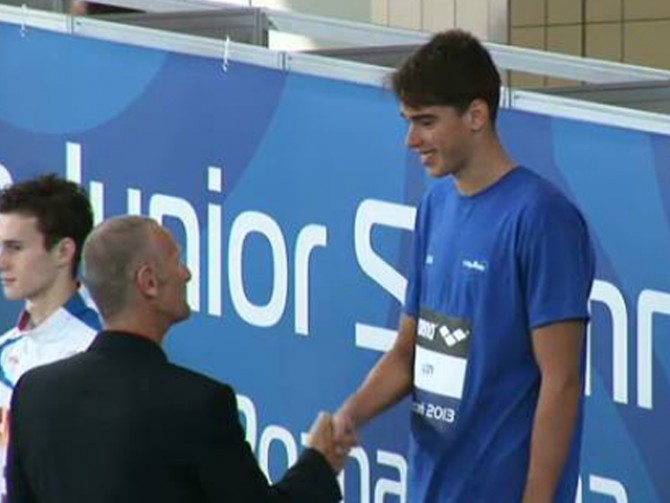 Greek 18-year-old Apostolos Christou won the gold medal in the 100 meters backstroke in the European Juniors Championship held at Dordrecht in the Netherlands.

Christou not only won first place in the competition, but also broke the world junior record twice in one day.
The Olympiacos swimmer clocked at 54.41 seconds in the semifinal on Wednesday that gave his new junior record, after the old record by Italy’s Simone Sabbioni. Then in Thursday’s final he claimed the top spot clocking at 54.04, again leaving Sabbioni second.

Christou is one of the swimmers to represent Greece in the Young Olympic Games in China next month. As he stated to the media after the competition, his main ambition is to make the 2016 Rio de Janeiro Olympic Games: “It’s everyone’s dream. I want to be in Brazil in two years’ time and be able to stand out.”

Anna Diamantopoulou, the first Greek female on the shortlist to lead the the OECD, announced on Monday she is withdrawing from the race.
films

A group of Greek volunteer mechanics went to Evia fix vehicles that were heavily damaged in the flood in August of 2020.
Greece

The Dodecanese, the island archipelago which literally means ”The Twelve Islands”, officially joined their motherland of Greece on March 7, 1948.