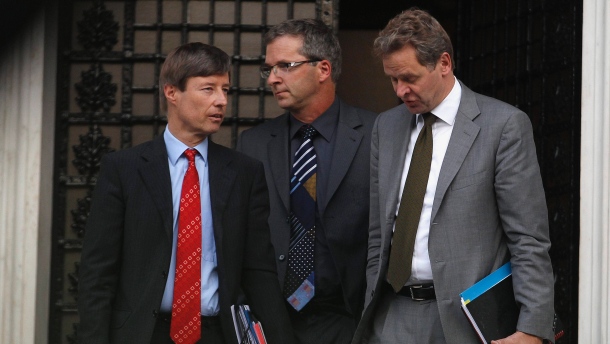 Greek Finance Minister Gikas Hardouvelis met with the troika on Thursday. During the meeting, he expressed strong displeasure over media reports on supposed government intentions to negotiate tax relief measures with the troika. This was Hardouvelis‘ first official meeting with the three representatives of bailout lenders and it lasted two hours.
The troika representatives focused their discussions with Hardouvelis on more than 15 separate issues, including the extraordinary “solidarity contribution” tax and the rumored government intentions to reduce or even abolish it. Moreover, Thursday’s deliberations with the troika devoted considerable time to two issues in particular: the fiscal gaps created by recent court decisions on “special public employee payrolls” – concerning uniformed personnel, judges and others – as well as the delays in acting on bailout memorandum commitments, which has led to a low compliance rate of just 20 percent, in part explained by European elections.
According to Finance Ministry officials, “there is a very large package of about 600 actions [memorandum commitments] for the April-June period, without taking into account July and August”. The Greek side on Thursday attempted to reassure the troika that the government has a plan to speed up the fulfilment of memorandum commitments while rebuilding the country’s economic credibility.
The troika appeared satisfied with the “small PPC” developments, after the relevant bill was finally approved by Parliament on Wednesday.
On Friday, the troika of Greece ‘s lenders will have a new round of meetings at the Finance Ministry. The first meeting will be with Labour Minister Yiannis Vroutsis. Meetings with Health Minister Makis Voridis and Development Minister Nikos Dendias will follow.
IMF’s representative Poul Thomsen will also participate in today’s meetings. The heads of the troika will complete their visit to Athens next Thursday.
(source: ana-mpa)