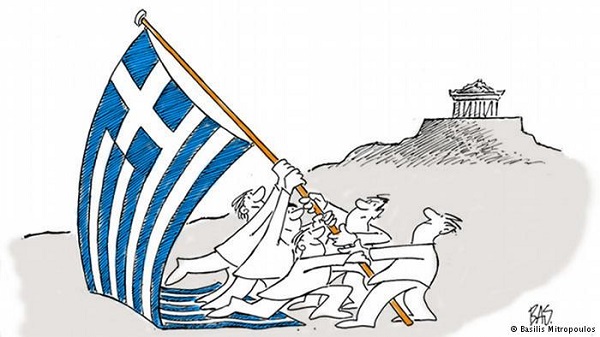 The German newspaper Deutsche Welle published an article today, June 9, on Greek artists, focusing on how they have dealt with the economic crisis in Greece. It has been one year since the state television and radio broadcaster ERT was unconstitutionally shut down by the government and DW spoke with many artists.
“Shutting down the station was an arbitrary and undemocratic decision,” said photographer Ilias Illiadis. He’s not alone: “Trust in the Greek government has fallen drastically, especially in the culture sector,” wrote the newspaper.
Furthermore, Giorgos Loukos, director of Athens Festival spoke with DW about the situation in Greece and the fact that the Ministry of Culture is not a top priority for the government. However, through private sponsors and thanks to his connections abroad, Loukos was able to secure several internationally acclaimed artists in order to make sure that the festival would once again take place this year.
“Despite the increasingly precarious economic situation, many of the performances at this summer’s Greek Festival are sold out,” said Loukos. “Ticket prices, however, are lower than in previous years, and the unemployed pay only five euros per show. The cost of the festival’s shuttle service out to the antique theater in Epidaurus has also been discounted. Audiences are young and very interested – and Loukos says that makes him optimistic,” mentioned the article.
Moreover, Afroditi Panagiotakou, Executive Vice Director of Onassis Cultural Centre said: “These days, both artists and audiences are more critical and more political than they were several years ago.”

Recent excavations undertaken by the Ephorate of Antiquities of Lesvos  have revealed new Byzantine structures and baths dating back to the Ottoman era.
Ancient Greece

French photographer and draughtsman Joseph-Philibert Girault de Prangey took the first-ever photograph of the Acropolis of Athens in 1842.
Greece