Athens, Thessaloniki Among Seven Regions with Shops Open on Sunday 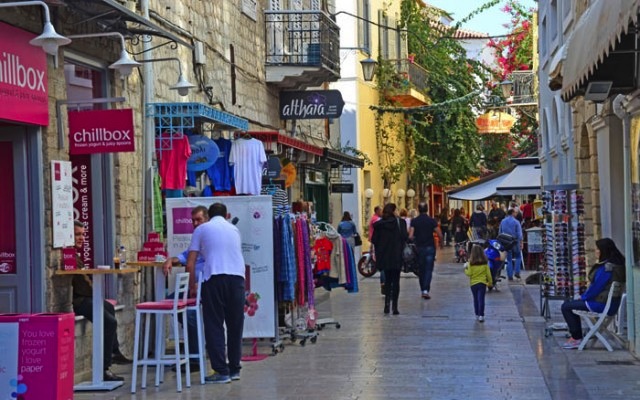 The city centres of Greece’s two largest cities, Athens and Thessaloniki, will be among the seven Greek regions where shops will be allowed to open on Sundays, on a pilot basis, according to a Development Ministry decision signed on Monday. The other regions where the measures will apply include some of the country’s top tourist destinations – such as the islands of Rhodes, Mykonos, Santorini, Kos and Syros or the peninsula of Halkidiki in northern Greece – along with the Pikermi and Rafina districts in Attica.
The measure, which is due to be published in the government gazette, is among the prior actions demanded of Greece under the memorandum agreements for the bailout loans, which stipulate that the ministerial decision must be issued by July 7, 2014 and state the areas where shops have the option to stay open every day of the week, regardless of size and without the approval of the regional authority.
Its implementation will be among the actions to be monitored by the next troika review and, judging by the results of the pilot implementation of the measure in the above regions, the issue of Sunday opening for all shops in the spring of 2015 will be re-examined, not ruling out full deregulation of shop opening hours throughout the country.
Apart from Sunday opening, deregulation will have an impact to the sales periods and special offers, with the Development Ministry due to issue a decision by October 7 establishing a code of conduct for protecting consumers with respect to special offers, sales and other promotional activity. The present status quo will be re-examined at the end of the current year so that legislation lifting all remaining restrictions will be passed by early 2015.
Meanwhile, shops throughout the country will operate from 11:00-20:00 on July 20, in accordance with existing legislation allowing shops to remain open for seven Sundays a year, including during the summer sales that start on July 14 and end on August 30.
(source: ana-mpa)