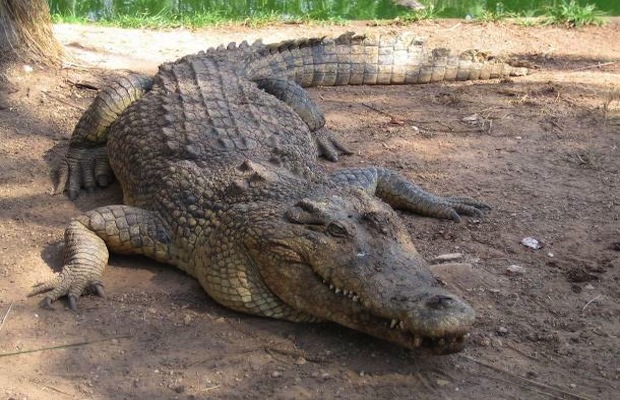 A two-meter long crocodile was spotted at the area of Potami Dam near the city of Rethymno, Greece, on the island of Crete. When the Fire Department patrol spotted the crocodile, they informed local authorities.
Officials arrived on the spot to see the crocodile and record its movements. “At first we thought it was a joke” said the Director of the Department of Transportation and Hydraulic Engineering Projects Management of Crete Development Organization, Vangelis Mamangakis, “but once we realized that the witnesses are reliable we started investigating the incident”.
The crocodile probably ended up in the wild after its reckless owner decided to get rid of it when he realized how big the reptile would end up. With crocodiles being a rather rare sight in Greece, Mr. Mamagakis believes that the crocodile may have been kept as a pet at a home or by a visiting zoo and was subsequently abandoned.
There are also rumors of a video which shows a second crocodile, leading some to believe there is a chance they have already mated. Reptologist Petros Lymberakis, a specialist for the Museum of Natural History is expected in the area to assist in locating and dealing with the reptile.
The news of the crocodile’s sighting have caused concern to tourists visiting the island. They are hesitant in swimming in the area, especially if the rumor that the crocodile has already mated and that there are more crocodiles is proven true.
Officials in Crete have issued an alert and a ban for swimming in the area. However, there are a few ‘reckless’ swimmers who ignore the warning and put their life in possible danger.
The Crete crocodile is not the first to make an unexpected appearance in European waters. In 2001, fire officers in Austria were called to rescue a South American crocodile from the river Danube, which was later taken to Vienna’s Schoenbrunn Zoo.