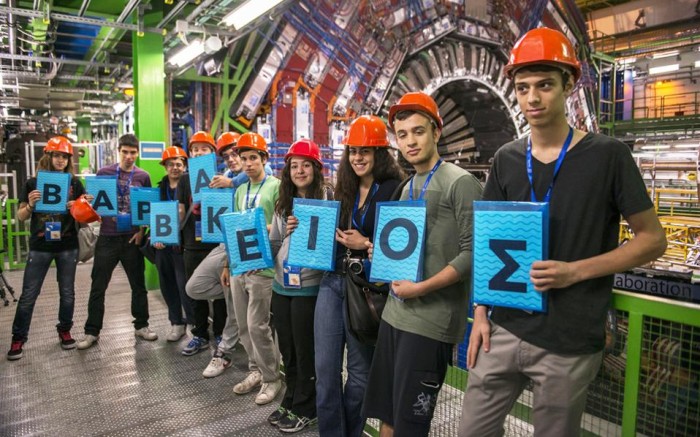 The members of the Physics Team of Varvakeion High School in Athens, along with Dutch students, won an international competition held at CERN on the occasion of the institution’s 60th birthday. “We were not anxious because we thought we had no chance of winning against our peers from countries with a tradition in the industry, such as the U.S., China or Germany,” says the 17-year-old student, Nikolas Plaskovitis.

Two hundred and ninety-two proposals were submitted, ten of which came from Greek schools, placing Greece in the top ten, next to larger and more populated countries, such as Germany and India. “Greek schools show great enthusiasm, and online communication between schools and CERN scientists has hit a new record. Student visits have increased by 60%, between 2012 and 2014, while each year 100 Greek teachers participate in training sessions,” said Dr. Angelos Alexopoulos, a member of the Education Group at CERN.

The Greek student team, along with Dr. Andreas Valadakis, continue to meet in the midst of summer in preparation for their big moment: the experimental implementation of their submission at CERN, September 10 to 17. The Greek proposal addresses the weak force, which was present during the creation of the universe and is responsible for energy production in the Sun and other stars. “It was a big challenge because we were looking for an original experiment with probabilities of success, which could be processed by high-school students,” notes Dr. Konstantinos Theophilatos, a postdoctoral researcher in the CMS experiment, who is part of CERN’s team from the Polytechnic University of Zurich.

“The moment we stepped into the accelerator, reminded me of a movie,” described an elated student, Konstantinos Papathanasiou. He has been part of the team for the last two years, despite his high school obligations.

However, the victory of the Greek team, which had only 0.3% chance of success, sends a message of hope. “The students witnessed with their own eyes that there are no limits, while they also refuted the notion which stated that people from other countries can do better than us because of the infrastructure that is available to them. In this effort there is no “ceiling,” stressed Dr. Theophilatos.