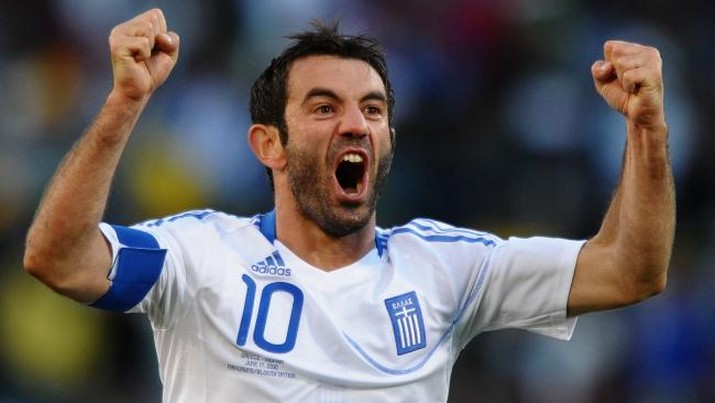 During the long flight from Brazil to Greece, Giorgos Karagounis answered to questions asked by his teammates.  After 15 years and 139 games wearing the white and blue shirt, the captain decided to give up his place. The teammates thanked an emotional Karagounis for his passion and loyalty towards Greece and the Greek football in general, and each of them asked him a question.
Lazaros Christodoulopoulos asked Karagounis  how he feels to be one of the most important players in the history of Greek football, as well as having an incredible character. Kostas Manolas was doubting that Karagounis would end his career with the national team, having in mind that he ran 14 kilometers in his last game against Costa Rica.
After a total of 23 years wearing Greece’s emblem (including youth teams), a tearful Giorgos Karagounis reveals his favorite moment so far and praises Otto Rehhagel and comments on the German’s input in Greek football. He also mentions seeing his daughter crying after the match against Costa Rica. Finally, “Kara” sends s unique message to the Greek fans. Ten minutes full of emotion and memories. Enjoy!