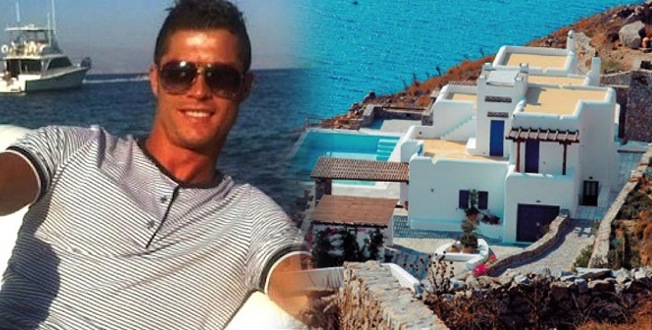 Portuguese footballer Cristiano Ronaldo chose Greece’s most cosmopolitan island, Mykonos, for his summer holidays.
The world-famous football player has visited Mykonos to relax and to comfort himself after the failure of Portugal in the World Cup in Brazil.
Cristiano Ronaldo arrived in the Greek island by plane on Sunday, June 29. Upon his arrival he expressed his desire not to be bothered by the paparazzi. However, a few hours later he was captured on camera relaxing on a luxury yacht.
Ronaldo is staying at the villa of Gianna Angelopoulos-Daskalaki in the area of Agios Lazaros. As reported, he is not accompanied by his girlfriend, top model Irina Shayk, but by some good friends.
On the third day of his stay on the Greek island Cristiano Ronaldo and his friends boarded on a luxury yacht and visited the neighboring island of Paros, while on their way back they made ​​a stop at the area of Rinia.
Mykonos is the preferred Greek island for many international stars as it is famous for its cosmopolitan air and its wild nightlife. A couple of days ago, Jose Mourinho, the Portuguese manager of Chelsea, visited the island with his family to enjoy their holidays.
http://www.youtube.com/watch?v=huPNxtcVvBc