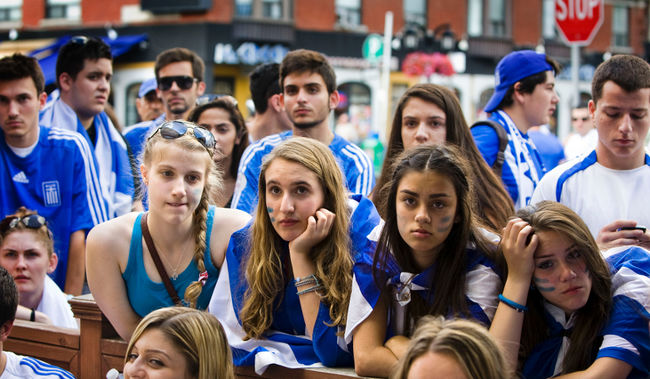 Soccer fans in Greektown in Toronto were sad the night of June 29, after the elimination of the Greek national team from the rest of the World Cup.

After a close game, Costa Rica beat Greece in the penalty shoot out and Greece’s fans who filled Danforth Ave. were really upset.

Every shop and restaurant in Greektown had been showing the game and when Greece scored its only goal to tie the game fans dressed in blue and white and draped in Greek flags went crazy.

But as the tie game went to overtime, fans knew that the line between glory and defeat was thin. The penalty round was really intense and even passersby stopped to watch it.

In the end, though, it was a defeat and the fans slowly moved away from the crowded restaurants.

The feeling of disappointment was overwhelming, but Greek fans are still proud of their national team.

“It was the first time they advanced to that level, so we’re proud, disappointed, but still proud,” said Gina Tsirmpas.

Aliki Triasty, who has also been watching the game said: “I’m so proud of them no matter what. It’s so great to have all of us out here together. I bet more people came out for this than they did to vote.”