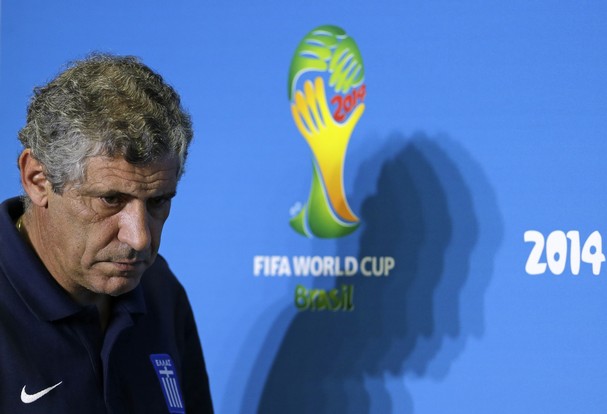 RECIFE, Brazil (AP) — The Greece squad surprised its critics to make the second round of the World Cup and has delighted its people back home left downcast by the financial crisis.
It’s not winning many fans in Brazil, though.
Greece squeezed through to the round of 16 with an injury-time penalty for a 2-1 win over Ivory Coast — despite the majority of the Brazilians at the game in Fortaleza loudly backing the African team.
Ahead of Sunday’s knockout game against Costa Rica in Recife, Greece coach Fernando Santos was expecting the locals to be yelling for the Central Americans and again against his team.
“I don’t know why they (Brazilians) don’t like Greece, but anyway,” Santos said on Saturday.
It might be because Greece tends to favor a defensive style that goes against Brazilians’ natural tendency to back open, attacking football. Greece’s only two goals so far at the tournament came in that decisive group game against the Ivorians. The second was a disputed late penalty.
So Santos promised “we will attack as much as possible” against Costa Rica.
Even then, he doesn’t expect to change the minds of many Brazilians and said Greece can’t be “hurt by it.”
“If we had these past three games in this way, the next will probably be the same,” he said. “We hope we can still achieve better results and perhaps in the next match they will still go against Greece. OK. And the next and the next, they will still go against Greece. It doesn’t matter.”
Lightheartedly, Santos, who is from Portugal, even pointed out that he shared a common language with Brazilians and still they don’t support his team.
Actually, Santos is unlikely to change his cautious tactics too much against a Costa Rican team that loves to counterattack and is led by striker Joel Campbell, who is familiar to a few of the Greece team who play with him at Olympiakos.
“He’s a great player, he’s tough, he’s strong, he can help his team very much. I hope he’s not as good tomorrow as he’s played with Olympiakos,” Greece defender Vasilis Torosidis said.
Greece is already in new territory at the World Cup after progressing from the group stage for the first time. Costa Rica has never gone past the second round. For one, Sunday will mark a major moment in its World Cup history.
Yet Santos, who is likely at his final tournament with Greece, is taking it as it comes. Even the bizarre situation of his contract expiring on Monday, the day after Greece might have made the last eight for the first time, doesn’t appear to bother him.
The Greek football federation will just extend it for as long as they need to while Greece is still in the World Cup, he explained, apparently unfussed.
“Today I will spend the evening in the very same way, but in a different hotel,” Santos said. “But I will sleep well, normally.”
Copyright 2014 The Associated Press. All rights reserved. This material may not be published, broadcast, rewritten or redistributed.