Little Jay Will Not Travel to Brazil (video) 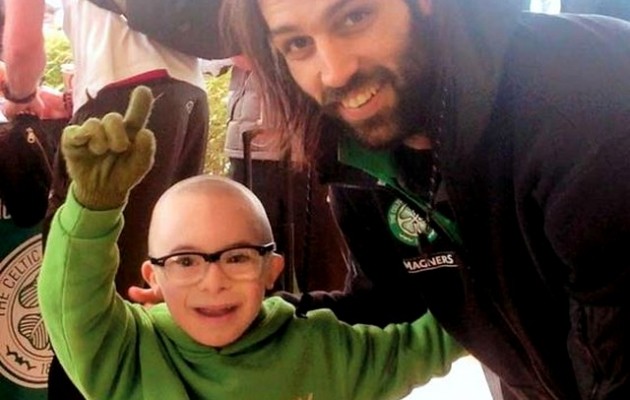 The story of Jay Beatty has moved the world. Τhe 11-year-old Irish boy suffers from Down syndrome, but that never discouraged him from supporting his favorite team, Celtic of Glasgow. Jay’s idol is ”Sammy,” his nickname for Georgios Samaras, and even though the Greek player’s ’s contract with Celtic expired, Jay promised to support his favorite player no matter what team he plays for.
When Sammy traveled to Brazil with the Greek National Team, Jay wore a Greece T-shirt and supported the Greeks from the beginning. He watched with great anxiety Greece’s efforts and was as happy as ever when Samaras scored against Ivory Coast elevating Greece to the final 16. Jay’s father uploaded a video where his son was celebrating Samaras’ goal. It had thousands of shares on Facebook and brought tears to people’s eyes all over the globe.
Two Greeks decided to create a page on Facebook asking the Greek Football Association to invite little Jay to Brazil to watch the Greek team play against Costa Rica. A few days later, the page had 100,000 fans and it was all over the Greek Media. Furthermore, Samaras recorded a video where he wished Jay could follow Greece’s next match in the tournament.
“This boy gives me so much strength, it’s incredible. There are no words. I feel his love so much. This love I feel, is also felt by many people in Greece. There’s a Facebook page for him to come to Brazil,” Samaras added.
Finally, Jay Beatty’s dad received a call from the Greek Football Federation inviting the Beatty family to Brazil. Unfortunately, they had already planned and booked a holiday to the USA and it was impossible for them to cancel and travel to Brazil.
“We were unable to take up the offer and are so gutted, but truly grateful that people would do this for Jay. We cannot believe that this has happened and are so humbled and would like to wish Greece all the best in the World Cup,” his father said.
Jay’s response was immediate as well and he sent his love to Samaras. “Thanks Sammy I hope you win the World Cup. I am sorry I won’t be there, but I still love you very much and I hope you win. Come on Sammy!”