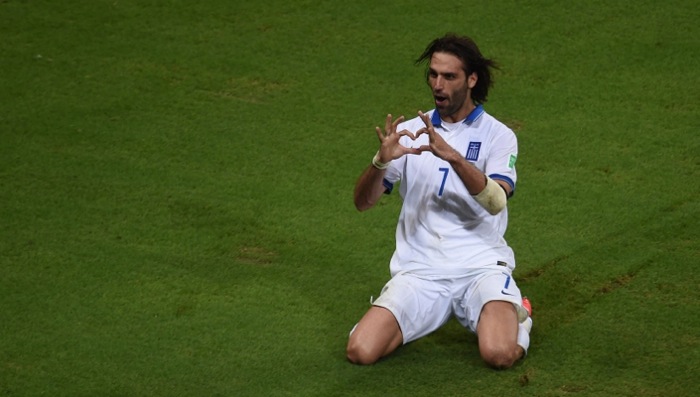 Georgios Samaras was announced the MVP of World Cup’s Greece vs Côte d’Ivoire match, according to FIFA’s official website. Samaras assisted in the first goal and scored the penalty that he won in the remaining seconds of extra time.
The Greek footballer who was born and raised in Heraklion, Crete, knew that if he missed that penalty he would be crucified by the same people that now praise him. Greece is not a nation of people who would sit down calmly and empathize with a player after a failed attempt to score. One look at comments of Greek teenagers on Greek sports sites and you ‘ll be wondering where do they come up with such mastery of swear words.
It’s obvious to say that if Samaras sent the ball over the bar, just wide of the posts, or in the keeper’s hands, he would have a similar greeting to the one Roberto Baggio had when he missed Italy’s final penalty in the 1994 World Cup final in the US. Or even worse, remember how the British media turned against their most beloved player and future superstar, David Beckham, when he was red carded against Argentina in the 1998 World Cup.
It’s beyond our imagination how difficult it must be to have the souls of 20.000.000 Greeks on your shoulder while also facing the greatest challenge of your life.
Samaras’ calmness in the 2014 World Cup decisive match against Côte d’Ivoire was not a coincidence, but  a result of the player’s traing in Holland, and specifically in Heerenveen’s youth team.  When he picked up the ball, we all knew that there was nobody else as capable of taking that risk as he was. No other player had the courage to take that shot.
Despite what he has heard over the years because of his dislike to defend, Georgios Samaras is our most gifted and skilled soccer player and last night he managed to turn his charisma into one of the most important victories Greece has ever seen. He is definitely worth that MVP title and all the praise he is receiving today, after sending Greece to the World Cup’s 16 elite.