GRNews
GreekReporter.comGreeceJulio Iglesias to Perform in Mykonos for Whopping 335,000 Euros

Julio Iglesias to Perform in Mykonos for Whopping 335,000 Euros 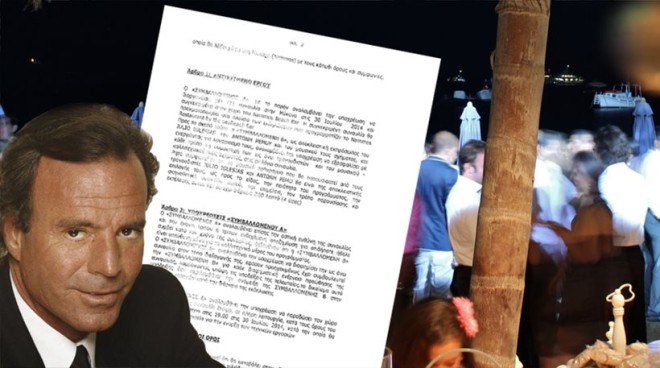 Julio Iglesias, the Latino artist with the most record sales worldwide (over 300 million), probably didn’t think he would be performing in a country that has been plagued by an economic crisis for almost 5 years. However, the Greek island of Mykonos in Greece has once again managed to achieve the impossible.
Usually, big concerts featuring international music celebrities take place in huge stadiums or other designated venues. In Mykonos those rules don’t apply. In fact, Julio Iglesias will be singing on a ten meter iron pontoon which belongs to a beach bar-restaurant called Nammos.
Nammos’ reputation has spread worldwide in recent years, mostly due to the fact that its owners are able to book internationally renowned artists each year. Julio Iglesias will be arriving at the small airport of Mykonos in late July in order to perform at Nammos restaurant, located at Psarou Beach on the Cycladic island of Mykonos on July 30, for a whopping 335,000 euros!
The official contract which was published today by the Greek online newspaper protothema.gr, reports that the total amount of 335,000 euros will include the payment for Julio Iglesias and his associates, as well as their flight, accommodation, and transportation expenses.
In addition, it was announced that Antonis Remos, a famous Greek singer, will also be performing along with Iglesias, and he is planning on singing four duets with the internationally acclaimed singer.
In total, Nammos’ owner will spend around half a million euros for this event, including the payment for the Greek artist.
Moreover, rumor has it that Australian pop singer, Kylie Minogue, is expect to perform in Psarou Beach along with Amr Diab this summer. The total cost of the concert is expected to exceed one million euros.