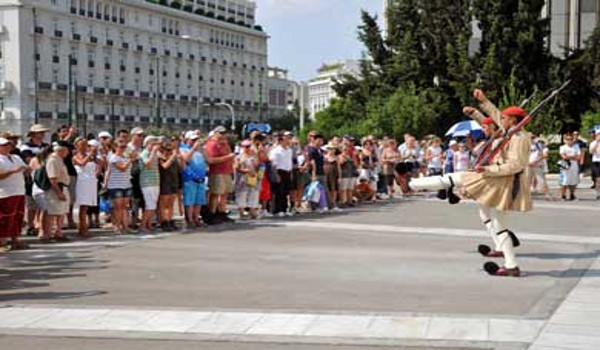 Greek revenues from tourism have increased more than 25 percent during the first four months of 2014, compared to last year. Both tourist arrivals and revenues are estimated to skyrocket this year in Greece.
According to data released by the Association of Hellenic Tourism Enterprises SETE, in 2013 the average amount spent per visit was 660 euros. This year the correspondent number is expected to exceed 700 euros. Arrivals are expected to jump to 19 million, or 21,2 million including cruise visitors. SETE also stated that Greek tourism revenues are expected to rise from 12.2 billion in 2013 to 13.5 billion euros in 2014.
According to figures released by the Bank of Greece on Monday, tourist arrivals from January to April 2014 have followed an upward trend of 21.1 percent compared to the same months of 2013, exceeding 1.9 million visitors. Only in April, the number of tourists arriving in Greece increased to 728,000, namely a 30.6 percent increase compared to April 2014.
Tourism is expected to give an important boost to Greek economy since it is one of its main cash earners. This year’s revenues, from January until April 2014, have shown an amazing increase of 27.8 percent, reaching up to 900.2 million euros. More specifically, in April 411.1 million euros were earned by tourism, indicating an astonishing 35.8 percent increase compared to April 2013.
Data released by the Bank of Greece prove that the increase both in tourist arrivals and spending per trip are the reason for the tourism receipts increase.
Average spending per trip has increased by 6.2 percent compared to 2013. The biggest increase, however, is observed on Britons holidays’ giveaway, since they have spent 50.5 percent more during their visits in January-April 2014 than during the correspondent months in 2013.
The number of cruise ship visitors is expected to remain approximately the same as in 2013, since financial crisis related turmoil has led cruise companies to show a preference towards the U.S. and other travel destinations rather that Europe and the Mediterranean.