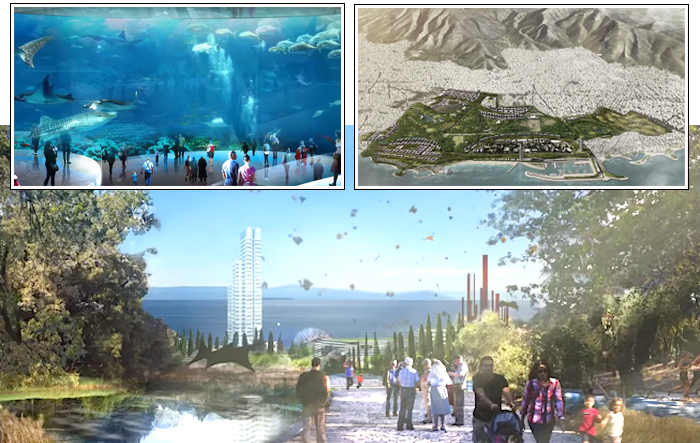 Lamda Development, the company that bought the land of the old Athens airport, presented the plans for the architectural project in the coastal area of Ellinikon on Tuesday, June 24. The company’s CEO Odysseas Athanasiou stated that construction work of the project will begin in 2016.
According to estimations of Lamda Development and the two foreign associate companies, Fosun from China and Al Maabar from Abu Dhabi, 3 billion euros will be invested during the first three years of the project’s construction. Seventy percent will come from investors’ capital and the remaining 30% from bank loans.
In addition, the investment will create more than 50,000 work positions, while maintenance costs are estimated at about 10 to 12 million euros per year.
The ambitious project indicates the creation of a park 15 times bigger than the National Garden. It also envisages the building of two hotels of about 2,500 beds and a shopping mall, sports facilities at the naval club, and housing developments — including a high-end “landmark” architectural building for luxury apartments but also detached houses and apartments.
The metropolitan park will have multiple entrances from surrounding municipalities, while the “historic” buildings of the former airport will be retained and highlighted. There will be Olympic Games facilities and buildings such as the exhibition center and a national aviation museum, while the former runways will be converted to paths for walking and recreation. The green spaces will feature vegetation typical of the Attic landscape, which is expected to improve the area’s microclimate and quality of local life.
In conclusion, Odysseas Athanasiou stated that the creation of a new world destination will redefine Athens as a tourist attraction and international business and entertainment center. “Marina Residential Tower,” for example, one of the tourist infrastructures, is designed to draw one million additional tourists every year in the Greek capital.
Lamda Development also guarantees that it will implement principles of sustainable development and environmental certification standards in all facilities and works carried out.