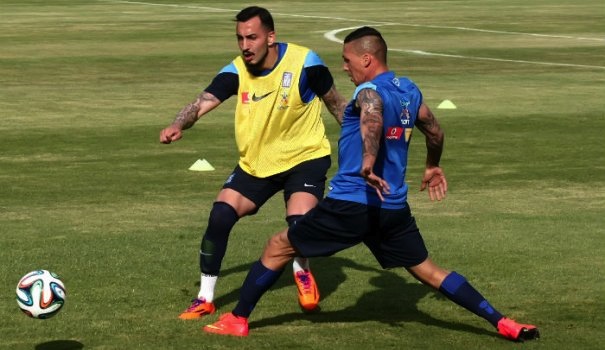 FORTALEZA, Brazil (AP) — After a troubled start, the smiles are returning to West Africa at the World Cup. Nigeria has earned its first victory after a stalemate with Iran, and Ghana held Germany to a 2-2 draw after losing to the United States. Now Ivory Coast is looking for a place in the last 16 by beating Greece after its earlier loss to Colombia.
Having won the opener with Japan, coach Sabri Lamouchi said the Ivory Coast’s own mistakes had handed Colombia qualification in the second match in a 2-1 defeat.
“We didn’t deserve to lose that game — a draw would have been fair,” the French manager said. “Now we have to beat Greece … That’s how we’ll get through.”
Ivory Coast plays its final Group C match in Fortaleza, in control of its fate with three points, while Greece and Japan have a point each.
Lamouchi said he wasn’t planning any major changes to his starting lineup. He will be hoping Roma striker Gervinho adds to his two goals already in the tournament, while also counting on the presence of veteran striker Didier Drogba as a second-half substitute.
Yaya and Kolo Toure have decided to stay on in Brazil despite the death of their brother, Ibrahim earlier this week in England.
The Ivorian football federation has meanwhile said it will double an undisclosed cash bonus to players if they defeat Greece, which lost its opener to Colombia 3-0 but kept its qualification hopes alive by holding Japan to a 0-0 draw with 10 men.
Greece midfielder Costas Katsouranis will miss Tuesday’s game after being sent off in Natal against Japan, but insisted his teammates could turn their fortunes around.
“Despite the difficulties in the game against Japan, we are improving, and the players are totally focused on what we came here to do: fight to reach the last 16,” said Katsouranis, who celebrated his 35th birthday with teammates Saturday at their training base in Aracaju.
The low-scoring 2004 European Champions have only found the net twice so far in three World Cup tournaments, while conceding 18 goals.
Striker Kostas Mitroglou limped off in the first half against Japan after colliding with Makoto Hasebe, but is available for coach Fernando Santos on Tuesday.
“With the hard work we’ve been putting in and a little luck, the goals will come,” said Mitroglou, who was key to Greece’s qualification campaign but was sidelined at Fulham after his mid-season transfer to the Premier League from Olympiakos.
“They have excellent players like Drogba and (Yaya) Toure. But we have to look at what we are doing,” Mitroglou said. “The task is simple. We have to win.”
GreekReporter will be live blogging Greece’s third game against Ivory Coast on Tuesday at 4 pm (USA – EST) / 11 pm (Greece).
Copyright 2014 The Associated Press. All rights reserved. This material may not be published, broadcast, rewritten or redistributed.