By Andy Dabilis
June 21, 2014
Facebook
Twitter
WhatsApp
Linkedin
Email
Chinese Premier Li Keqiang is wrapping up a three-day visit to Greece on June 21 with a visit to Crete – along with Prime Minister Antonis Samaras – as the two leaders talked about closer business and cultural ties.
Some 19 deals worth nearly $5 billion were signed and one of the highlights was a tour of the port of Piraeus, now mostly run by the Chinese company Cosco, which wants to build its stake in the operations to 67 percent as China expands its presence across the country in ports and infrastructure.
Le said he sees Piraeus as “China’s gateway to Europe.” In shirt sleeves and tieless, the two cited the port’s potential. Li described it as “the pearl in the Mediterranean” and said he was keen to work with the Greeks to make it “the most competitive port in the world.”
After the business was concluded, Samaras and Li moved more toward focusing on other ties, including tourism, and to support each other’s stance on world issues.
China said it backed a UN-mediated settlement to reunify Cyprus, divided since an unlawful 1974 invasion by Turkey, while Greece said it would support Chinese investment efforts with the European Union.
Samaras and Li also agreed to help each other in the financing, investment and trade sectors and to correct trade imbalances, with Greece seeing keen interest from the Chinese in its products and as more Chinese flock to Greece as tourists and for island weddings.
China is also interested in scooping up state enterprises in a lagging privatization program, citing the country’s archaic and money-bleeding railway system that could be used to transport goods to the rest of Europe, which has far superior railroads and lines.
Li noted that the use of Piraeus as a hub had already reduced the time it takes to transport Chinese exports to the EU by between seven to 11 days. The development of the shipyard zone at Piraeus is another goal, he said.
Marine transport and shipbuilding reportedly topped the agenda of talks at a lunch given by President Karolos Papoulias in Li’s honor and attended by Samaras as well as several key cabinet members including Deputy Prime Minister and Foreign Minister Evangelos Venizelos and Merchant Marine Minister Miltiadis Varvitsiotis. Papoulias, who met with Li separately, called him “a great friend of Greece.”
Li and Samaras also visited the Acropolis and Athens’s National Archaeological Museum, with Li calling it “wonderful,” after comparing the country’s ancient and famed cultures. 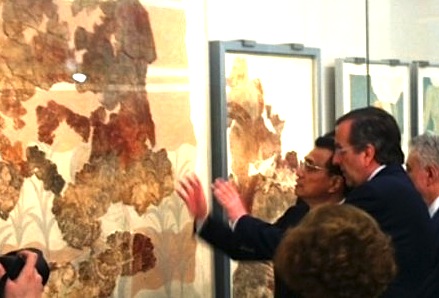 Li asked asked questions to the museum’s Alternate Director George Kakavas regarding the Greeks’ know-how in the processing of plant colors. The brief visit ended with a tour of the hall with the exhibit on the Antikythera Shipwreck and mechanism, the Athens News Agency reported.
Before departing, the prime minister and his wife received commemorative gifts from Samaras’ wife and the director of the National Archaeological Museum.
On Crete, where Samaras was to join him, Le was expected to reiterate Beijing’s interest in a new international airport near the port of Iraklio. Li arrived on the island late on June 20 and was due to also see the archaeological site of Knossos and the Iraklio Archaeological Museum, together with Samaras, to inaugurate a renovated wing.
The Chinese prime minister and his delegation were welcomed at the airport by Tourism Minister Olga Kefalogianni, Crete Regional Governor Stavros Arnaoutakis, Decentralised Administration Secretary General Grigoris Rokadakis, Iraklio Mayor Yiannis Kourakis and deputies. The Chinese delegation is staying in Hersonissos.