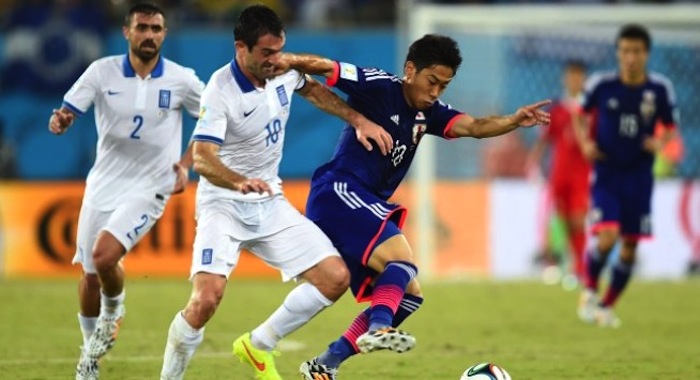 Spirited Greece, who was left with ten players from the first half have hold on Japan to a goalless draw at a World Cup Group C match in Natal, Brazil.
The “Samurais” weren’t able to take the 3 points against ten-man Greece: they had 74% of the ball and only four shots on target. Japan were a real let-down, Greece… parked the bus and it is their fans who celebrate at the end.
The Greek team was down to ten men for almost an hour, as Kostas Katsouranis was sent off for two first half bookings, while Mitroglou went off with an injury in the opening period. The Greeks were a better side in the first 60 minutes, but suffered in the last 30. They were forced to defend for the latter stages with all nine outfield players sitting deep. Greece will now need a win against Ivory Coast (if Japan doesn’t beat Colombia) to qualify.
In a desperate search of goals, Greece was set to start striker Kostas Mitroglou to lead the attack against Japan in a must-win game for both countries at the Arenas das Dunas.
Mitroglou, who was injured for much of the last season for Fulham in the Premier League, was used as a late substitute in Greece’s 3-0 opening loss to Colombia. Greece has scored just two goals in seven games in its World Cup history while surrendering 18.
Coach Fernando Santos also kept Yiannis Maniatis in midfield despite a reported training camp dispute with Georgios Tzavelas. Maniatis reportedly threatened to leave Brazil and Santos had deflected questions before the match whether the incident would prompt him to drop Maniatis against Japan.
Japan coach Alberto Zaccheroni made only one change to the lineup he used in a 2-1 loss to Ivory Coast, adding veteran striker Yoshito Okubo up front with Europe-based star Keisuke Honda. Honda scored against Ivory Coast.
MVP for the Greeks, the goalkeeper Orestis Karnezis who was perfect, made no mistakes and kept the Japanese away from scoring.
In all honesty, it was a lethargic draw in Natal as Japan failed to break down the ten men of Greece. The goalless draw sees Colombia advance to the knockout stages. Greece faces Ivory Coast next Tuesday in “Estadio Castelao” of Fortaleza. It’s a final for both sides, whoever wins, passes to the next round.
Japan: Kawashima, Uchida, Konno, Yoshida, Nagatomo, Yamaguchi, Hasebe, Okazaki, Honda, Okubo, Osako. Subs: Nishikawa, Kagawa, Kakitani.
Greece: Karnezis, Torosidis, Papastathopoulos, Manolas, Holebas, Maniatis, Katsouranis, Kone, Fetfatzidis, Mitroglou, Samaras. Subs: Karagounis, Salpingidis,  Gekas.
Referee: Joel Aguilar