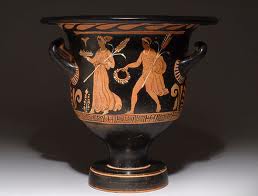 After 70 years, the German government returns thousands of neolithic findings that were transferred  to Germany during the occupation of Greece. The ancient Greek artifacts were stolen by the Nazi forces and over the past 70 years, the Greek governments have been making efforts for their return.

According to Deutsche Welle during a ceremony held on Wednesday in the open air museum Pfahlbaumuseum, on Lake Constance, southern Germany, about 10,626 neolithic findings were returned to representatives of the Greek Ministry of Culture.

This was the second return of antiquities from Germany to Greece within two weeks. In early June the Baden State Museum returned two masterpieces of the early Cycladic period including one of the largest surviving marble Cycladic idols and a rare example of the Cycladic “frying-pan” vessels made of stone.

The initiative belongs to Gunter Schöbel, director of Pfahlbaumuseum.  He said that ancient findings are important for a country’s identity and he stressed that the return of the Greek antiquities is a matter of honor for Germany.

Commenting on the German initiative, the General Director of Antiquities and Cultural Heritage, Maria Vlazaki-Andreadaki, said that the return of the artifacts is of great importance as it shows that the German state acknowledges that the cultural property of a country should not be removed.

According to Schöbel, the warehouses of several German museums contain many antiquities excavated from various German services during the occupation of Greece. A possible Greek-German collaboration could lead to their identification.