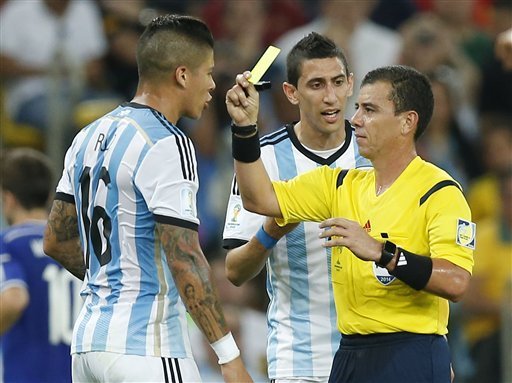 El Salvadorian Joel Aguilar will be  the referee for the World Cup 2014 game between Greece and Japan in Natal, Brazil. Aguilar officiated Argentina’s victory over Bosnia in their opening fixture where the 1986 World Champions won 2-1.

Thursday’s game is a crucial one for Greece and Japan who face elimination after losing their first World Cup matches against Colombia and Ivory Coast respectively. Greece struggled to even score against Colombia eventually losing 3-0, while Japan’s performance was dubbed promising from their fans, leading the score in the first half with a goal from their star player Keisuke Honda before Ivory Coast turned the game around with two goals in the second half, both headers from Gervinho and Bony.
Joel Aguilar, 38, has also covered several other FIFA competitions, including the FIFA Club World Cup where the champions of each continent meet and the FIFA Confederations cup. He is considered one of CONCACAF’s finest referees. Joel is the first arbiter of his country participating in a World Cup after leading the final of the Cup Gold Cup in 2011 and 2012 and the Champions League CONCACAF in 2011.
The 20th FIFA World Cup began on June 12 and ends on July 13. A total of 64 matches will take place in 12 cities of Brazil between 32 teams that qualified.  Greece’s third game is against Ivory Coast on June 24.
Here is the liveblog of the Greece vs. Japan Live noe: