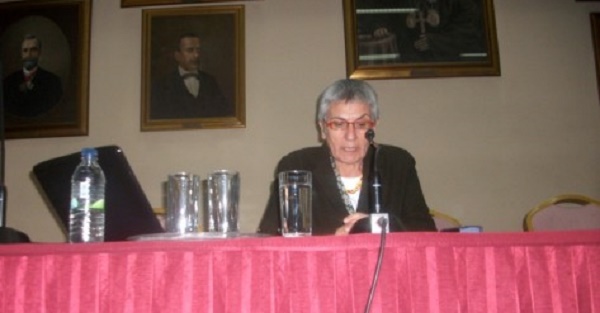 The badge of the Order of Excellence was presented by the President of the Turkish Republic Abdullah Gül to Evangelia Balta for her contribution to the literature and culture of Greeks in Asia Minor.

Evangelia Balta is a historian working at the National Research Foundation and she has had a leading position in the study of the “Karamanlidika” idiom of the Christian Orthodox people of Asia Minor. Karamanlidika is a variant of the Turkish language, written in the Greek alphabet.

At the award ceremony, which was held at the presidential palace in Ankara, President Abdullah Gül said that the Turkish Republic does not only honor those involved with recent Turkish culture, but also the country’s previous cultural history.

“We do not refer only to the Turkish Republic, but also in all those civilizations that flourished in the past in this geographical area, because they are all part of Turkey’s cultural heritage,” said the Turkish President and added: “It is important to show our gratitude to these people, who continued working even under difficult conditions, and to thank them for studying and promoting Turkish culture.”

The event was attended by Lakis Vingas, representative of the Greek Diaspora in Istanbul, who expressed his warmest congratulations to Evangelia Balta for this great distinction and her very important work, concerning the history of the Christian Orthodox population of Asia Minor and Istanbul.

Evangelia Balta organized a major scientific conference about Karamanlidika and the different forms of language writing (Armenian, Ladino Judeo-Spanish, Greek) of the Ottoman Empire, this year at the Sismanoglio Cultural Center of the Greek Consulate General in Istanbul.