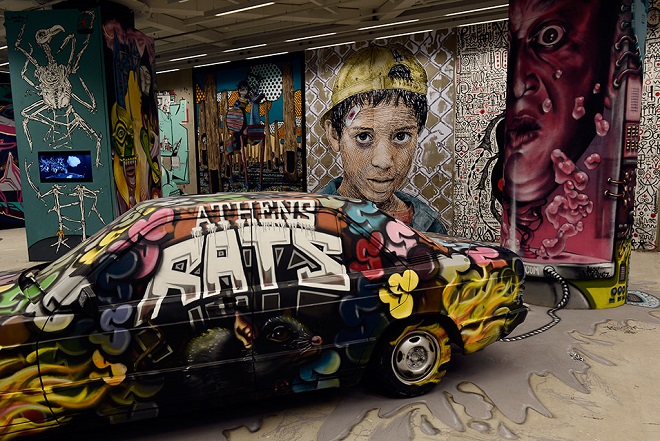 The austerity measures have driven Greeks into a state of desperation over the last four years and the troubled times that many are coping with are now being expressed all over the walls of Athens.
Around 60 artists participated in the 2nd annual street festival with the title “Crisis, What Crisis?” which is an effort to lead the artists away from unemployment and poverty.
“We are all paying for this crisis, whether in Greece or elsewhere,” said Franck Duval, a college artist who is involved with street art  for the last 8 years. Furthermore, Duval who has been influenced by “Zorba the Greek,” added: “The walls of Athens deserve a little more color and joy.” The vice dean of the Athens School of Fine Arts stated: “We seek to evoke reactions, no longer just in studios but outside. Art is not just for the few.” Street art has “exploded in the city these past six years. It is a form of protest that takes the artist out of his studio. Young people are looking for ways to express themselves in hard times and street art is an ideal vehicle for that,” he added.
Since 2010 when Greece took a loan of 240 billion euros to avoid bankruptcy, Greek citizens are suffering from strict reforms such as wage and job cuts. That is why they are often protesting aggressively. According to festival organizer Gogo Kolivira, artists are “interpreting the news in the public space” but in a way of generating “optimism and hope.” Works of 2013 inspired by the anti-austerity protest between 2010 and 2012 such as “Death of Euros” are now on display at the School of Fine Arts. The event will last until the end of June.
(By Maria)