TechNews
GreekReporter.com Greece Rally for One Year Since ERT's Closure

Rally for One Year Since ERT's Closure 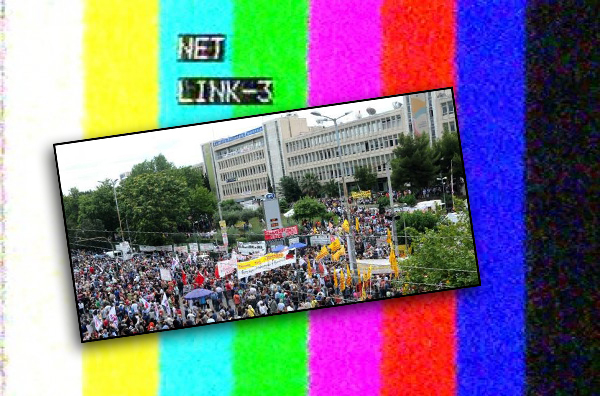 June 11 2014, marks one year since the sudden closure of Greece’s public broadcaster ERT by the government. The decision had stunned the nation and caused widespread reaction among the journalism community.
The spokesman of the Greek government, Simos Kedikoglou, that afternoon, announced ERT’s closure and talked derogatorily for its employees   At 11:15 p.m. ERT was shut down, after the last newscast was broadcast as normal at 9:00 p.m.
The European Federation of Journalists (EFJ) has expressed its support of the protests held by Greek journalists to mark this day and to remind the government that it has failed to fulfill its promise to restore a new independent public broadcaster.
“One year on, we have seen no efforts from the government to restore an independent public broadcaster to serve the public interest,” said Mogens Blicher Bjerregård, EFJ President. “Yet, we have witnessed  the efforts made by ERT journalists who are doing their utmost to uphold the country’s democratic values by continuing to broadcast information to Greek citizens,” he added.
Journalists across Greece will participate today in  a four-hour work stoppage across all media from 12 a.m. to 4 p.m. as a sign of solidarity to the fired ERT employees. At noon, journalists will march from the National Union of Journalists (JUADN) headquarters in Athens to the Ministry of Finance. A demonstration will also be held outside the broadcaster’s headquarters in Agia Paraskevi, Athens, at 7 p.m.
The Journalists’ Union of Macedonia and Thrace Daily Newspapers (ESIEMTH) will also hold a protest rally at noon and will  join ERT journalists, who are occupying the ERT3 building in Thessaloniki, to broadcast via live stream  a program marking the anniversary, that will be aired from 5 p.m. to 8 p.m. Athens will follow by broadcasting live the massive rally that is planned outside ERT’s building.
On May 4 2014, the Greek government officially launched the New Greek Radio, Internet and Television (NERIT) that was designed to replace ERT. The new public broadcaster, which employs 132 journalists, has been criticized for its lack of transparency in the hiring procedures and is accused of following an Athens-focused  media agenda that fails to service the general Greek public.