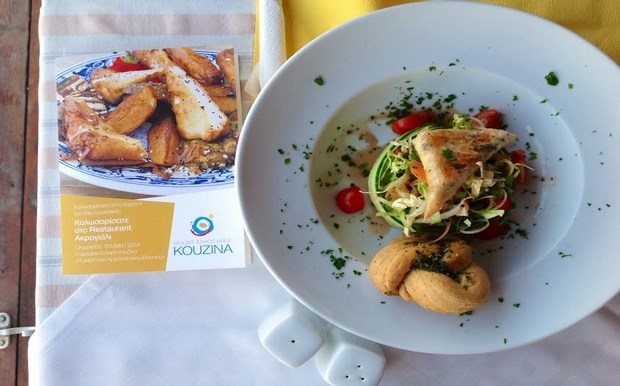 Members of the Cultural Club of Nea Roda in Chalkidiki, northern Greece, presented traditional cuisine from Asia Minor to 40 representatives of European tourism offices and 6 Turkish Media representatives.
From June 2-8, the event “Mount Athos Area Kouzina 2014,” was dedicated to the traditional cuisine of Asia Minor and Pontos. The events were hosted in Ouranoupoli, Nea Roda and Ammouliani, combining flavors from Mount Athos and Asia Minor.
The Women’s Agricultural Cooperative of St. Anthony delivered lessons of Pontiac cuisine and offered the attendees traditional food. The Cultural Association of Ammouliani presented traditional recipes such as the famous dolmades (stuffed vine leaves) and the authentic Asia Minor macaroons, a recipe brought from Proikonisos of Asia Minor.
The six Turkish media representatives visited Sidirokafsia, Byzantine silver and goldmine and Ottoman mint east of Thessaloniki, and coastal areas of Chalkidiki.  The theme of “Mount Athos Area Kouzina 2014,” dedicated to Asia Minor was supported by the “Turkish Airlines” and “Ambotis Tours.”
The next theme of the event taking place from June 9-15, is dedicated to the Mediterranean and especially the French cuisine. The events will be held in collaboration with the French Cuisine Festival and SOPEXA, an international marketing agency founded by the French Ministry of Rural development promoting French agricultural products in foreign markets.