Greek Islands of the Saronic Gulf 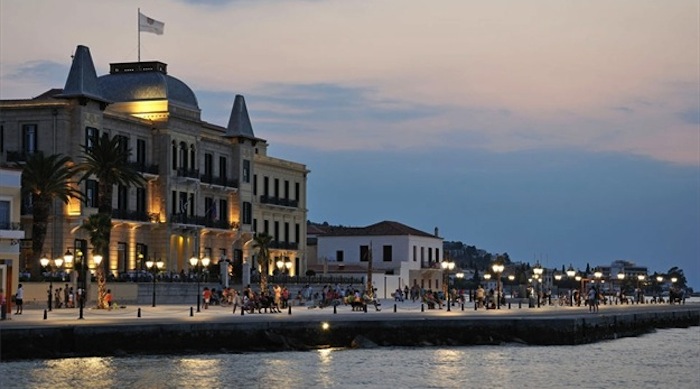 The majority of tourists in Greece visit Athens and the islands of Cyclades. However the Aegean, the heart of the Greek world, has many more islands to be discovered. Hydra, Poros, Aegina and Spetses are beautiful islands in the Saronic Gulf, that on a clear day, can be seen by the Temple of Poseidon in Sounio.
These islands, close to the country’s capital are ideal destinations for short excursions. Visitors can reach the islands whether by ferryboat, cruise ship or hydrofoil. Ferries leave from Piraeus several times daily, and most of these islands can be reached under three hours, except Spetses which is four hours away. The travel time is cut down by half with a hydrofoil, but the sea might be choppy and the routes are often cancelled.
The most popular of such excursions is an all-inclusive cruise to three islands: Aegina, Hydra and Poros, visited in a single day…..
Poros is the first port of call. It was built around several hills and its most famous landmark is a clock tower with the distinctive colors of blue and white, placed in a hill. From the top of the tower it is possible to observe the activities of people down on the streets of the island. Another place worth visiting is the monastery of Zoodochos Pigi.
Hydra is the next island stop. Hydra is a cosmopolitan island and the best place for souvenir shopping. In the 1960’s and 1970’s it was a jet-set destination and even today many celebrities and artists are visiting the island. The town of Hydra is picturesque, with old white washed buildings, cobbled streets full of chic boutiques, restaurants and bars. Cars are banned on the island.
Aegina, the largest island of the three, is the final destination. In northeast of Aegina town there is the famous Temple of Aphaia, built between 510 and 480 BC. The temple was dedicated to the goddess of wisdom and light, Aphaia. It is built at the highest point of the island overlooking a breathtaking view of the sea. Aegina is also famous for the rich production of pistachio nuts.
Spetses is a little farther away and although not included in the one day tour, it is a beautiful island worth visiting. Spetses is opposite Epidaurus, and is also a very cosmopolitan island with luxurious hotels. The town’s central square is festooned with lights and the main means of transport are horse-drawn carriages.