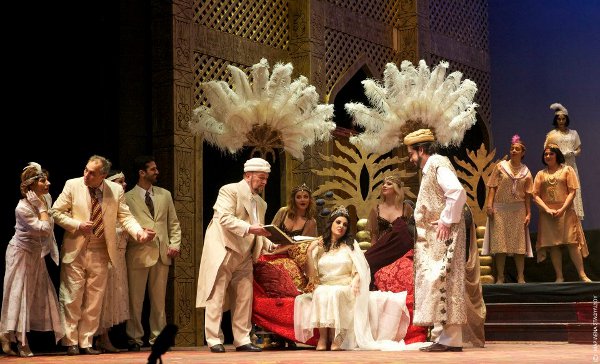 This summer the Greek National Opera will be hosting many interesting productions and offering these events for free to a Greek audience.
The two biggest summer productions will be staged at the Herod Atticus Theater, in partnership with the Athens Festival. Mozart’s “Don Giovanni,” conducted by Lucas Karytinos and directed by Yannis Houvardas, will be presented on June 11-15, and Verdi’s “Otello,” conducted by Myron Michailidis and directed by Yannis Kokkos will be presented on July 27-31.
The ballet company of the GNO will present “Zorba,” with choreography by Lorca Massine  and music by Mikis Theodorakis. The show will be staged at the Panathenaic Stadium on June 29.
The Greek National Opera will also stage a free open-air concert titled “Opera alla Greca” at the archaeological site of the Temple of Olympian Zeus. Acclaimed soloists and the GNO’s choir will interpret arias in Greek, as well as duets and choruses from the most popular international operas. Mozart’s “Don Giovanni” will travel all over Greece in the form of a “Suitcase Opera” a mobile production form which allows operas to be performed at unusual places beyond theaters.
Young artists will have the chance to present their works in the Olympia Theater in central Athens. Opera Studio soloists will perform Baldassare Galuppi’s comic opera “L’amante di tutte” on June 20 and 22, while seven dancers will present original works that they have choreographed themselves as well as extracts from the classical and contemporary repertoire on July 4-5.
Finally “The Murderess” opera by Yorgos Koumentakis based on the novel of Alexandros Papadiamantis, will travel within Greece starting from the island of Skiathos on July 6.  There will be a symposium on the work of the Greek writer including speeches by professors and the production crew.