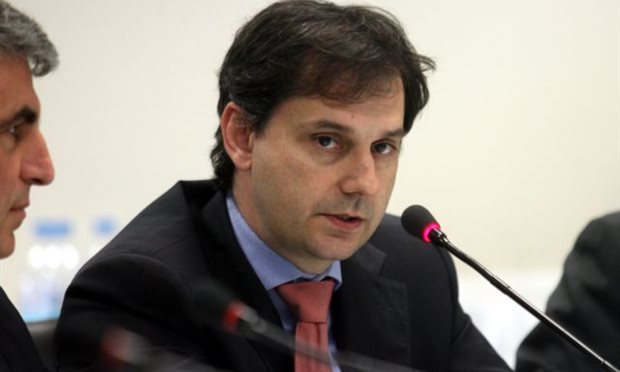 While rumors regarding the upcoming cabinet reshuffle and the possible ministerial appointments are widespread, Greek General Secretary of Public Revenue Haris Theoharis announced his resignation Thursday after a meeting with Greek Finance Minister Yannis Stournaras, causing discontent among Greece’s international partners, the European Union and the International Monetary Fund (IMF).
“Theoharis took over the leadership at the General Secretariat of Public Revenue, which for over a year was without a supervisor at the most difficult time during the peak of Greece ’s fiscal crisis, and under the most harsh conditions,” Finance Minister Stournaras announced, while acknowledging the reforms put through during his tenure and his accomplishments.
“I thank him very much for his services and wish him good luck in his future undertakings,” Stournaras added.
According to sources, already since Wednesday afternoon, the Greek Finance Minister is said to have asked Theoharis to resign, blaming the Secretary for a recent initiative, which was addressing foreign Greek bondholders and prompting them to pay taxes for their titles. The decision, which was made public right before last month’s elections, displeased the government and caused severe turmoil in the Finance Ministry cycles, and was immediately revoked.
This development doesn’t appear to come as a surprise, as government officials had recently cited problems in their working relations with the General Secretary. Theoharis, however, argued that he was being targeted for the government’s political decisions, while mentioning that the resignation is for personal reasons.
The term of the General Secretary of Public Revenue has a length of five years, is an independent non-political appointment, and the only possibility for Theoharis to be removed from his position is only by tendering his resignation.
Greece’s International partners displeased
The prompted resignation of Theoharis has created further turmoil, with Greece’s international partners showing their great discontent, while the abrupt seasonal closure of the Greek Parliament Wednesday also triggered political upheaval in Greece’s domestic and foreign political scene.
Officials in Brussels and the Troika are said to have been informed about the decision to remove Theoharis while more changes are imminent in the state mechanism.
European Commission officials are reported to have expressed their great dissatisfaction with Theoharis’ removal, underlining that the 5-year term is in place so as to protect the General Secretary from political appointments, while mentioning that Theoharis has accomplished many tasks during his tenure. The IMF is reported to have also reacted to the decision.
At the same time, Greece’s partners are very displeased with the government’s decision to conclude the current Parliament session and redirect urgent policy changes to the summer session, which begins in two weeks.
Many reform measures that were due to be addressed prior to the Eurogroup meeting on June 13, which would likely approve Greece’s new bailout installment, have to be put off until the Parliament opens for its summer recess session, in which only one-third of the total 300 Greek MPs participate.