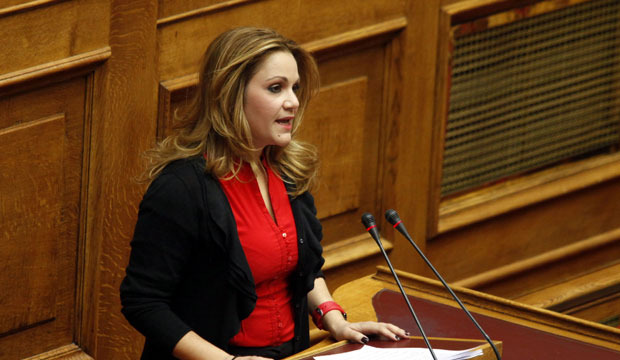 The woes of Independent Greeks leader Panos Kammenos, whose party floundered in the European Parliament elections, continued on June 3 when he lost another lawmaker, the second in six days to quit.
Mika Iatridi said she was leaving the party because of its dismal showing in the EU ballot, winning only 3.4 percent of the vote, less than half of what it got in the 2012 national elections.
In a letter to Kammenos, Iatridi said her departure was due to the “disorientation of the movement.” She also stated that the result of the elections showed that the party proved unable to express and meet the demands of society.
In a letter she sent to the President of the Greek Parliament, Evangelos Meimarakis, she announced that she will stand as an independent MP.
Concerning  a possible return to New Democracy, she said: “I have expressed my opposition to government’s policy which led to my erasure from the party. My views have not changed. I’m still near to the people who support me and the suffering society.”
On May 29, the party lost a former Parliament spokesman and mayoral candidate for Athens, MP Vassilis Kapernaros, who said he was upset he received so little backing in his run for the city’s top job.
The Independent Greeks (ANEL) has lost seven MPs and is now down to only 13 in the 300-member Parliament, further negating what little influence it had as Kammenos continues to be hounded by defections and disappointments.
ANEL fell below the already-marginalized Democratic Left (DIMAR) which has 14 MPs and did even worse in the EU ballot with 1.2 percent of the vote, leading the party to seek a reorganization and decide whether Fotis Kouvelis will remain as its leader.
ANEL now is just ahead of the KKE Communists, who have 12 lawmakers. With Iatridi’s move, there are now six independents in the body.