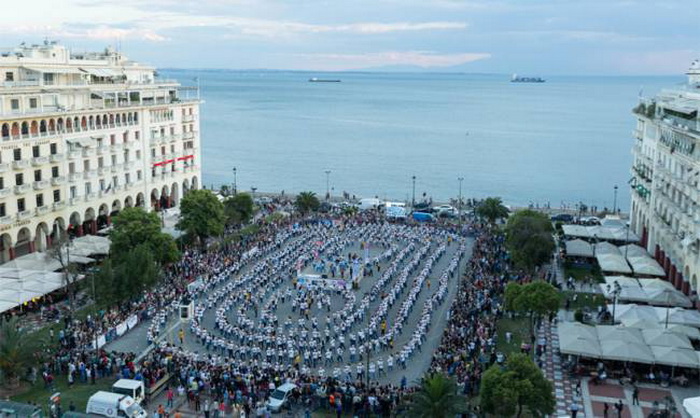 Citizens in Greece’s northern port city of Thessaloniki gathered Monday afternoon in the city’s central Aristotelous square to set a new world record for “the largest rueda de casino” dance, and achieved in breaking the record previously held by Italy.
The event was an initiative by the dance schools of northern Greece and included 1,102 participants, who danced for a total of 7.16 minutes, thus breaking the record held by Italy since 2010 which consisted of 706 participants dancing for 5 minutes.
Apart from the goal of setting a new world record, Monday’s event also aimed to raise money for charity, as the €5 participation fee will be donated to the local charity “Hope for the Child,” helping kids and families that are need and can’t afford to support themselves.
“All pairs danced in concentric rings for over 7 minutes, and the record was written down by a legal notary, so as to be sent to the Guinness World Records,” Ioannis Domantzis of Danza Fuerte dance school said to the Greek press.
Rueda de Casino is a particular type of Salsa square dance. Pairs of dancers form a circle with dance moves called out by one person, while many moves have hand signs to complement the calls which is useful in noisy venues where spoken calls might not be easily heard. Most moves also involve the swapping of partners.