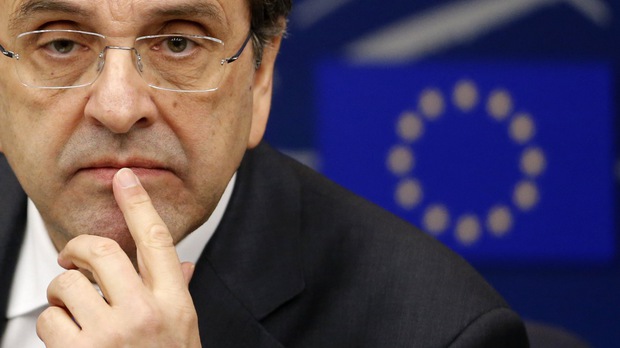 The long and rancorous campaign for Greek municipalities and the European Parliament, which saw the major opposition Coalition of the Radical Left (SYRIZA) come in first, won’t bring national elections, Prime Minister Antonis Samaras said.
The 3.8 percent win by the major opposition Coalition of the Radical Left (SYRIZA) in the EU ballot gave them six seats in Brussels while the ruling New Democracy Conservatives of Prime Minister Antonis Samaras got five, and other Greek parties got fewer according to the representation of the vote they got.
And that relatively small margin, said Samaras and his coalition partner, PASOK Socialist chief Evangelos Venizelos, means the government will carry on until 2016 and there won’t be snap polls before then no matter how much SYRIZA leader Alexis Tsipras demands them.
SYRIZA got 26.5 percent to New Democracy’s 22.7 while PASOK, which tied itself to the new center-left political alliance Elia, or Olive Tree, in a bid to keep from vanishing, came fourth with 8 percent.
While PASOK lost 30 percent of its previous vote, its showing was enough, Venizelos said, to show a majority of Greek still support what he and Samaras were doing in imposing harsh austerity measures on orders of international lenders and not a mandate for change as Tsipras insisted. Combined, New Democracy-PASOK had more of the vote than did SYRIZA.
Samaras said SYRIZA’s failure to increase its share of the vote from the June 2012 general elections meant that there was no question of the government being able to carry on.
“Those who tried to turn the EU election into a plebiscite failed,” Samaras said in a brief televised address. “They failed to create conditions of instability, uncertainty and political ungovernability.”
He pledged that the government would heed the messages from Greek voters during the European vote, as well as in the second round of local elections that also took place on May 25.
“I know we have been through two difficult years,” added the premier. “I have traveled throughout Greece and listened to citizens. I understand their problems and I known what must change. We will move forward as quickly as possible.” He didn’t say what that mean.
A crowing Venizelos said he had been redeemed and what he called SYRIZA’s “blackmail” had failed, referring to the Leftists rant against pay cuts, tax hikes, slashed pensions, worker firings and stiffing investors with losses that Venizelos said saved the country. “SYRIZA’s rhetoric was met with indifference by the majority of people,” he said as Elia performed slightly better than opinion polls had suggested.
Tsipras, however, interpreted the vote as a clear win for SYRIZA and said it raised questions about whether the government could continue, especially in debt restructuring talks with the Troika of the European Union-International Monetary Fund-European Central Bank (EU-IMF-ECB) which put up 240 billion euros ($327 billion) in two bailouts.
“With what moral and political legitimacy will Mr. Samaras negotiate the issue of debt relief based on these percentages?” asked Tsipras. “With what moral and political legitimacy will he impose new, tough measures and the new memorandum he has agreed but is keeping locked up in his drawer?”
The SYRIZA leader called for general elections “as soon as possible.”
Meanwhile another new movement, the populist To Potami (The River), which had been polling third, lost that spot to the neo-Nazi Golden Dawn which got almost 10 percent, compared to the newcomers 6.6 percent, less than expected.
To Potami founder, former TV presenter Stavros Theodorakis, said that was enough, however, to show Greeks wanted change although he had simultaneously said he was willing to work with both New Democracy and SYRIZA, who won’t work with each other. He didn’t explain how that could happen.
“To Potami will challenge for the responsibilities that a new political force, which has no loans from the past but has young people, must challenge for with the aim of changing everything,” said Theodorakis.
To Potami was followed by the Communist Party (KKE) at 6 percent and Independent Greeks on 3.4 percent.
The results mean SYRIZA will elect six MEPs, New Democracy five, Golden Dawn three, Elia, KKE and To Potami two and Independent Greeks one.