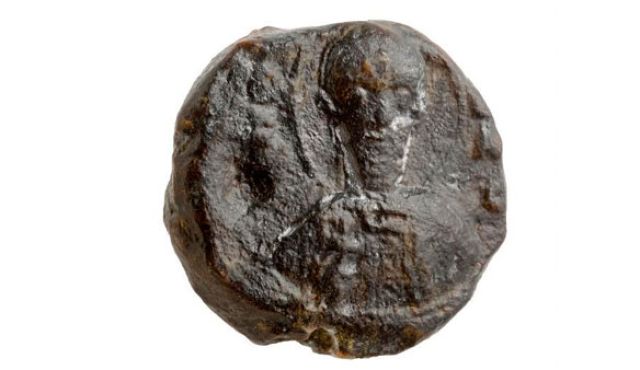 A rare seal dating back to the Crusades era has been discovered during excavations at the Monastery of St. Sabbas in the Bayit VeGan neighborhood of Jerusalem.

The seal was discovered a year and a half ago but it hasn’t been until now that the scientists completed the research process and identified the person depicted on it. The some 800-year-old seal was examined by Dr. Robert Kool from the Israel Antiquities Authority (IAA) and the French professor Jean-Claude Cheynet and is in excellent condition.

It bears the likeness of St. Sabbas, one of the most important personalities in Jerusalem during the Byzantine period. The obverse side of the seal depicts the saint’s figure wearing a himation and holding a cross in his right hand. The reverse bears an inscription in Greek: “This is the seal of the Laura of the Holy Sabbas.” However, despite his importance to Christian history in Israel, no other seals depicting him had been found before.

St. Sabbas (Mar Saba in Syriac) was one of the most influential leaders of the Christian monastic movement that developed in the Judean Desert during the Byzantine period. He was greatly involved in local political and religious affairs and he even traveled twice on foot to the capital Constantinople to request assistance from the emperor for the country’s inhabitants. Sabbas was canonized following his death and his name appears in the Christian saints’ list.

He also established several monasteries, with his crowning achievement being the construction of the Monastery of St. Sabbas, referred to as the “Great Laura” in the Byzantine period. Situated on a cliff overlooking Nahal Kidron, the monastery had hundreds of monks and nowadays it hosts about 10 Greek monks.

“The Mar Saba monastery apparently played an important role in the affairs of the Kingdom of Jerusalem during the Crusader era, maintaining a close relationship with the ruling royal family,” said Dr. Kool.

Furthermore, Dr. Yuval Baruch, the IAA’s regional archaeologist presented the important discovery to the Greek Orthodox Patriarch of Jerusalem, Theophilos III, who highlighted its importance for the history of Christianity in the Holy Land and its significance for archaeological research.