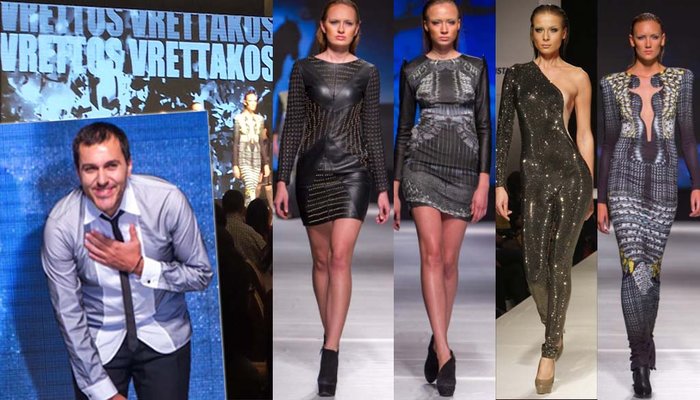 Vrettos Vrettakos is a London-based Greek designer who is very successful and famous in the international fashion industry.
Both Greek and foreign celebrities, actresses and singers have been selecting his luxurious yet simple and flattering designs for their formal appearances since the beginning of his career.
Born and raised in Piraeus, Vrettakos at first studied to become a journalist. However, he soon realized that his dream job was to become a fashion designer. He firstly went to Rome, where he studied fashion and costume design and then he went to London, where he attended the renowned Royal College of Art earning an MBA degree in womenclothing.
In 2005 he presented his graduating collection entitled “Ripples,” impressing both the critics and the audience and establishing him as one of the youngest underground designers in the British fashion industry. This particular collection was available in famous boutiques in Tokyo and London and was extremely popular among the costumers.
Among other partnerships with renowned Greek and foreign fashion houses and magazines, designers and photographers, Vrettakos has also worked as a designer at the luxurious French fashion house Dior when John Galliano was the head designer. However, in 2008 he decided to return to Greece, targeting the Greek fashion market with great success.
Various Greek celebrities such as Despina Vandi and Elena Paparizou have been choosing his designs for their formal appearances. However, lately his designs have become popular among international celebrities, as three renowned foreign singers, Beyonce, Jennifer Lopez and Shakira have been dressed in Vrettakos to attend major events.
According to the critics and his customers, Vrettos Vrettakos’ success secret is that his designs are sexy, glamorous and very flattering for the body without being provocative and trashy.