GRNews
GreekReporter.comGreeceVariations on a SYRIZA theme in Greece's Euro polls

Variations on a SYRIZA theme in Greece's Euro polls 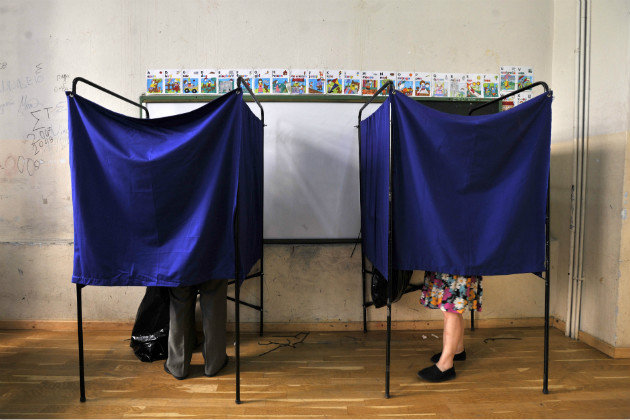 Three polls on Friday May 23, ahead of Greece’s Sunday European Parliament election vote, offer but variations on a theme: a SYRIZA lead.
An ongoing GPO poll for the Greek website Newsit gives SYRIZA a 1% lead over New Democracy, with definitive results to be published later Friday.
ALCO’s poll for Greek newspaper Proto Thema also shows a 3.4% lead for SYRIZA (24.2%) over New Democracy (20.8%), while far-right Golden Dawn ranks third on 7.7%. The newly founded To Potami polls 5.8%, the socialist coalition Elia 5.3% and the Communist Party of Greece (KKE) is expected to receive 4.8% of the vote.
Moreover, Independent Greeks (ANEL) have lost ground, polling 3.3%, while the Democratic Left (DIMAR) may not be able to elect an MEP with just 1.8%.
The ever-growing elephant in the room remains the undecided, whose ranks rose to 12.4% of respondents. Compared to last week’s results, New Democracy lost 1.2% of the vote, while Golden Dawn has gained support.
A poll conducted by Public Issue for Efimerida ton Syndakton also points to a SYRIZA (30%) victory over New Democracy (27.5%). A hefty 24% were undecided, while socialist coalition Elia ranks third with 8.5%, followed by Golden Dawn with 8%, KKE with 6.5% and To Potami on 6.5%. Independent Greeks (ANEL) are expected to win 3% of the vote, the Democratic Left (DIMAR) 2.5%. Other parties garnered 7.5% of those questioned.
Based on the results, New Democracy and SYRIZA are estimated to win six seats, with two each for Elia, KKE, Golden Dawn and To Potami, while Independent Greeks and the Democratic Left are predicted to win 1 seat each. As for who would win, SYRIZA is still in the lead with 42% (46% in April), compared to New Democracy which retained its 39% share, while 18% of the participants went for “nobody” or didn’t give an answer.