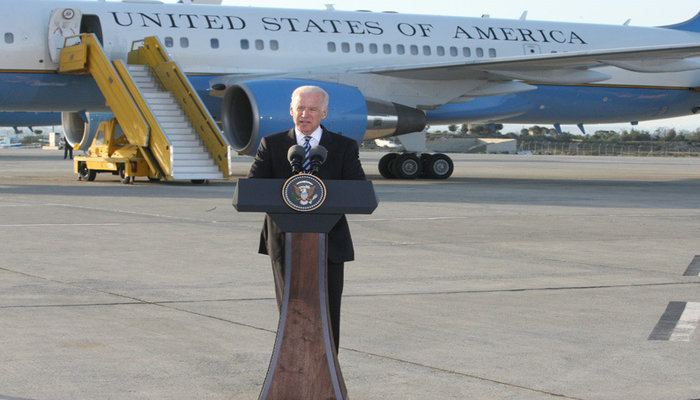 Joe Biden and his wife Jill, arrived at the Larnaca airport on Wednesday evening, May 21. The U.S. Vice President was welcomed by the Cypriot Foreign Minister Ioannis Kasoulides and the U.S. Ambassador to Cyprus John Koenig.
It is the first time a sitting American vice president is visiting Cyprus since Lyndon Johnson’s visit in 1962.
Upon his arrival, vice president Biden gave a short statement saying that he was looking forward to visiting Cyprus for a long time now. “I came here at the invitation of your president and the government of the Republic of Cyprus and I wanted to come to primarily underscore the value the United States attaches to our growing cooperation with the Republic of Cyprus. This relationship is now a genuine strategic partnership and it holds even greater promise,” said Biden.
Biden stated that the U.S. recognizes only the Cypriot government as the legitimate government of Cyprus. “The United States, I want to be clear about this, recognizes only one legitimate government of the Republic of Cyprus and my visit and meetings throughout the island will not change that. It is my personal position, it’s the position of the United States of America and it’s the position of the entire world, save one country,” he added, referring to Turkey.
Biden then thanked Cyprus’ President Nicos Anastasiades for “his cooperation and for his efforts to build a genuine strategic partnership with the United States, a partnership that holds even greater promise in the future.”
The U.S. vice president also commented on the matter of the Cyprus Issue solution: “I’ve heard that the local press assumes I’m coming with a plan for peace in my back pocket to solve the Cyprus problem. I’d like to put that rumor to rest. I came here on behalf of the United States to help you get a solution, not to present or impose one. Only Cypriots can decide on a vision for your future and only Cypriots can exercise the courage necessary to make that vision real,” Biden stressed.
Joe Biden will meet on Thursday with Nicos Anastasiades to discuss issues including the solution to the Cyprus Issue, Cyprus’ energy, regional security and the counter-terrorism policy, the crisis in the Ukraine and Cyprus’ role in Europe.
He will also hold meetings with religious leaders including Archbishop Chrisostomos II, the leader of the Turkish-Cypriot community Dervis Eroglu and both the Greek-Cypriots and Turkish Cypriots civic activists.
Upon his statement, the U.S. vice president didn’t accept any questions and left immediately for his hotel in Limassol. Biden will travel tomorrow to Nicosia.