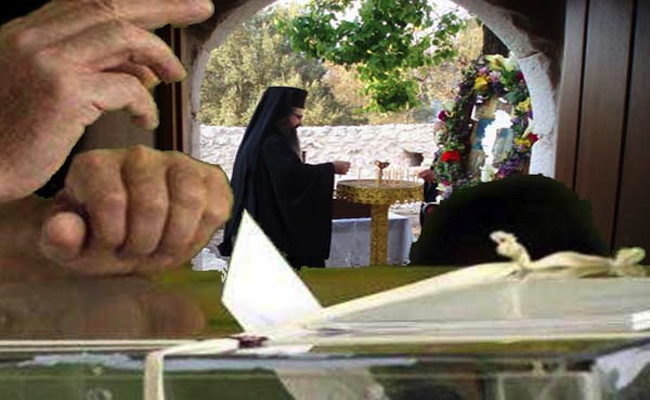 Apart from the thousands of candidates running for securing their “fifteen minutes of fame” in the forthcoming Greek local and European Parliament elections, and their “original” — in many cases — campaign commercials, funny incidents surrounding the double elections don’t seem to have an end, as even Greek Orthodox Church officials seem to have a saying in the campaign run.
Recently, Metropolitan Nikolaos, Church head in Mesogeia and Lavreotiki, a rural area surrounding the region of Athens, issued a circular letter to the churches of his jurisdiction, prompting the faithful to vote only for the candidates that believe in God and honor the country’s history, or else they will be sinning.
“The truth is that our political representatives are largely responsible. They ruined us. They created for us a society tolerant to drugs, and sacrilege. They decriminalized adultery, legalized abortions, instituted civil marriage and unholy partnerships, while revoking the Sunday holiday,” says the Metropolitan regarding Greece’s elected politicians, while mentioning that votes must be casted based only on spiritual criteria, and taking under consideration the person’s virtue and faith.
“Now they want to burn the dead, marry couples of the same sex, harvest our organs assuming our consent, facilitate people leaving this world by conducting civil funerals,” the lengthy call to Nikolaos’ faithful states.
“We are told that the Church must hush, that it should not upset the world. The Church’s mission however, is to awaken,” Metropolitan Nikolaos underlines, and adds, “That is why we must speak now, because if we keep silent, ‘the very stones will cry out.’ We can’t stand it anymore,” while also underlining how crucial the forthcoming elections are.