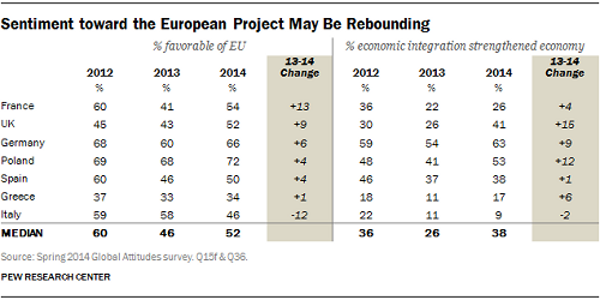 A survey conducted by Pew Research Center showed that Greeks remain skeptical of various aspects of the European Union although the overall support of the EU has rebounded.

The survey polled just over 7,ooo people in seven EU countries (France, Germany, Greece, Italy, Poland, Spain and the United Kingdom). Just a few days before Europeans make their way to ballot boxes to elect their representatives in the European Parliament, the survey highlights that Greeks show the least favorable view towards the EU, although the rates are raised by one percent (from 33 to 34 percent), compared to 2013. Compared to 2012, the rates are down by 3 percent. The average percentage among the countries is 52 percent in 2014, compared with 46 and 60 percent in 2013 and 2014 respectively.

Study results also showed that Germany (72 percent), Greece (69 percent), Spain (68 percent) and France (64 percent) would like to keep the euro as their currency.

According to the survey, Greeks strongly feel that their voice is not heard in the EU, which is out of touch, intrusive and inefficient. The percentages for each of these problems are up to 85, 86 and 67 percent respectively, while the corresponding percentages of the other countries are averaged 65, 63 and 57 percent.

Furthermore, 70 percent of the Greeks appear to be supportive of the idea that the EU promotes peace, although less than half of the respondents (30 percent) agreed that EU promotes prosperity as well. The percentage of Greeks that said they see EU as a world power was 59 percent.

The rating of favorability towards EU Institutions is quite low since European Central Bank, European Commission, European Parliament and European Union are seen favorably by only 17, 22, 26 and 34 percent of the Greeks respectively. The corresponding seven-nation averages are 30, 34, 36 and 52 percent.