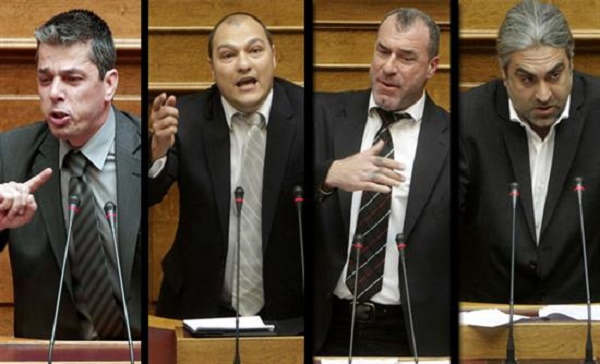 Despite tears and tantrums, parliamentary immunity enjoyed by Greece ‘s Golden Dawn MPs Giorgos Germenis and Nikos Michos, as well as two former (now independent) members, Chrysovalantis Alexopoulos and Stathis Boukouras, was lifted at a dramatic vote in the chamber Wednesday.
The decision to lift the immunity of the four MPs, who are accused of being involved in Golden Dawn’s criminal activity, was taken in the first vote in the parliament’s history to which MPs serving jail terms (Germenis and Boukouras) were allowed inside the chamber to cast their ballots.
“This will go down in history as the day an elected lawmaker appeared in Parliament led in handcuffs from prison,” said Germenis, a former black metal musician. “We are political prisoners.”
Some 220 MPs took part in the vote, which was marked by tearful outbreaks from independent yet handcuffed Boukouras about his pre-trial detention and from GD members who mocked their former “companions,” Alexopoulos and Boukouras, who left the party and are now independent.
“I try to persuade you of my innocence. How unfair is that I am incarcerated? … My children ask me why I am in prison, and I look them in the eyes, cry and don’t know what to say … I’m not a fascist, a Nazi; I’m a Greek patriot,” Boukouras said, apologizing for his emotional outbreak.
Now also an independent MP, Chrysovalantis Alexopoulos, was the first to take the stand. He denied all charges against him and said that he wished to become independent after the murder of Pavlos Fyssas but had feared for his and his family’s life, after witnessing GD’s attacks against many individuals.
His words drew a reaction from Ilias Kasidiaris, who shouted “excellent Alexopoulos,” and mockingly threw money at him, implying that he was bought out.
Nikos Michos spoke of political persecution against him, claiming witnesses have been called to testify against him, while promising to reward those who testify on his behalf.
“I’m proud of the choices I’ve made,” he said, and threatened that “after suffering comes vindication,” and “after corruption comes Golden Dawn.”